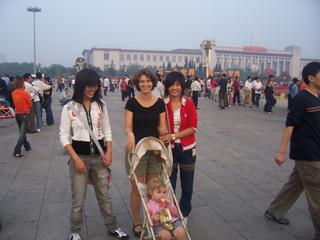 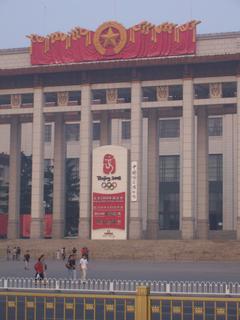 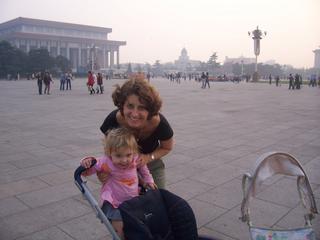 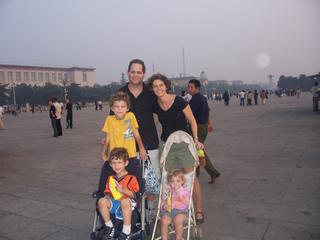 Tiananmen is surrounded on two sides by big government ministries, including the place where the politburo votes 2,000-2 in favor of things. They have a big countdown to the Olympics clock there. It is also, essentially, a countdown on our stay in China. It is about 1,000 days right now.

The bottom picture is a shot of two of the many people who asked to take a picture with Anna. She must be the screensaver on 200 beijing phones by now. I’ll get back to that in a minute…

Jacob asked us on Friday why we hadn’t been to Tiananmen Square or the Forbidden city yet, which shamed us into going to the former on Sunday. He is studying China right now. They are doing a survey of the world but starting here and he is really into it. He asked me to find “China landmarks” on the web the other day. So we figured we should strike while the fire was hot and headed out. Tomorrow (Weds.) I am chaperoning the dulwich college Second Grade trip to the Great Wall.

After a lunch at the restaurant on the edge of Ritan Park and yet another run around there – our third time already – we jumped in a cab. Tiananmen Square is, as you can imagine, huge. I mean, it’s really big. The biggest public square in the world and it feels it.

It’s a little confusing to figure out how to get there. It is bounded by a very busy street, which you have to cross under via a tunnel. We did so and were immediately accosted by vendors. We displayed a tiny interest in a kite – big mistake – and the guy followed us all around. It was interesting to hear the price drop form 150 RMB to 45. It was a nice kite. Maybe when Ruth comes, we’ll get one. In the meantime, I had to “booyah!” him away.

We strolled around, drawing attention all the way. There are a lot of tourists from other parts of china there and I think we are even more of a novelty with them. Any time we stopped for a minute – to take a picture or eat or whatever, we got a crowd around us and someone wanted to take a picture of or with Anna.

Needless to say, there is no marker of anything ever happening there. Not even the “On this date in 1989, absolutely nothing happened here” sign they had on the Simpsons. But when you’re there, you know.

There were many thousands of people on the square and it was getting towards sundown, when they have a changing of the guard ceremony. Thousands were lining up at the Northern end to see that. Across the boulevard is a huge, many stories photo of Mao. Thousands more Chinese were lined up there to watch. Many held little Chinese flags which were being sold all over the place. It was quite moving.