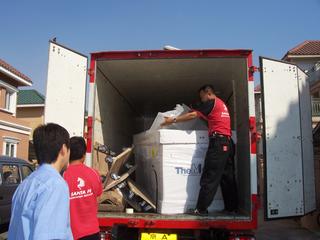 This picture in no way does the move justice. it is actually from our first, small air shipment. In the rush to get here on time for the big move, we forgot our camera.

I never really did get into the mechanics of our move. One of the amazing things about china is the staffing of everything. It’s where you really feel the huge population. They are doing work on a house across the street and there is a crew of 20 guys over there. You drive into a parking garage and 20 people are working there, including three standing erect all day at the front in a sort of show of order or force. So, of course, when the movers showed up, they had a huge crew. They worked very efficiently and politely and neatly. First thing they did was tape cardboard on to evey door frame. Such a simple and effective thing to do. Has anyone ever seen this done at home. I don’t recall it. Second thing they do is boot little paper booties over their shoes. Third thing they do is commence working their asses off.

They bring it all in, and after the truck was empty (for the first time – wait till you hear) they start unpacking. They put everything wherever we tell them, very nicely. Then they neatly fold up all the boxes and packing material and remove it. We had seven big crates full of stuff. The truck held three. So they unloaded them, then took a lunch break. It was getting really embarrassing as they brought in box after box labeled “toys.” We got rid of so much stuff and still filled a playroom, though a lot of the boxes were actually these Ikea containers. When they came back an hour or so later, the crew had doubled. They were doing another move in the compound and had finished, so they brought that crew over. The chief said to me, “we heard you had a very large mattress so we brought extra men.”

Before leaving, we went and got a new mattress, which got shipped directly to the dock (saving us sales tax) so we hadn’t even seen it since we purchased it in a blind haze in those final crazy days. We needed a new one and were told mattresses here sucked. (Remember the earlier post about Jacob’s bunk bed.) So we went to the store and somehow zeroed in on the most plush, expensive thing there. Jacob fell in love with it and kept saying, “You have to get the King Koil” and we basically thought, “oh hell, we’re moving to china. let’s get the most luxurious bed we can.” So we did. Now, we have a king size bed and this thing is just insane. They determined it would not fit through the doors an dup the steps and they rigged up this crazy system and basically raised the back tail of the truck, with the mattress on there and a bunch of guys and a bunch more came up here to the balcony and they raised up as high as they could, then shoved it up and in, with much grunting.

So they get the King Coil in and put it on our bed and it’s like the princess and the pea. We practically need a ladder to get in bed, and we are laying improbably close to the ceiling. Eli checked it out and said, “How am I going to get in your bed?” ha! It is very comfortable, I must say. It’s like a really firm, thick mattress with a foot of soft memory foam (Tempurpedic style) on top. Jacob ran in and laid down and declared that the king coil was his bed. We cut a deal where he can sleep on it one night a month. And that turned out to be last night, because went out for dinner with Janet markel and Barry, good friends of my folks who were in town. We were at this fancy joint downtown when my cell rang, about 10 pm and I hear this scratchy little voice asking, “Dad, when are you coming home?” it was Jacob. They just were not going to bed with Ding Ayi. We got a cab and a half hour later, phone rang again. Eli: “Where are you, daddy?”

We got home about 11 to three awake kids. Had to get them down as fast as possible, so we dispatched Jacob to the King coil. They all did surprisingly well today though eli completely fell apart about 8 pm.

In the morning, we have our first soccer games. I’ll let you know how it goes. Have a great weekend. And drop me aline if you’re reading, because there are too many of you lurking. I need to know!

Mr. Lee the cook debuted last night FAQs About Our Life in China
Scroll to top