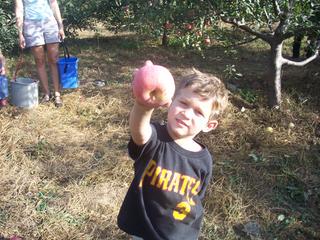 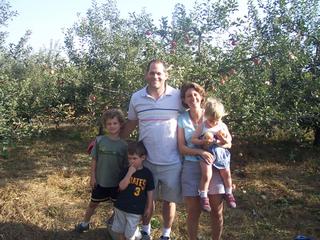 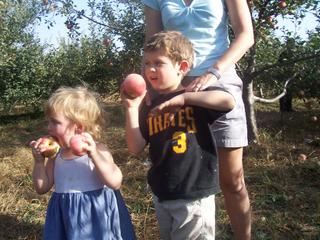 We went apple picking yesterday, about 30 minutes north of our house. Jacob was actually invited to a birthday party in the orchard, a pretty good idea actually. As you can see, we manage to not get any particularly great photos. But it was just that kind of day; everything seemed 10 degrees off or something. We decided to all go up there, because you can get into some really pretty places up that way and it was a beautiful day, and fall apple picking is a family tradition.

Alas, we hired a driver for the afternoon, which proved to be unnecessary since there were a bunch of people from here going with plenty of space in their vehicles. The area was not that pretty and was overrun by ladybugs of all things –which actually sting, though I never knew that until yesterday – and it wasn’t really well set up for kids running around. Plus, we really missed Gabie, Nathaniel, Laura and Greg, with whom we have traditionally picked apples each fall. At least we didn’t have to pay that annoying Wightman Farm membership fee!

Despite our annoyances, the kids had fun. Jacob found one fruit-laden tree and yelled, “Applemania!” He also enjoyed running around with his pals, several of whom are on his soccer team, which has proven to be a great social thing for him. Not quite so much for Eli, though he is also having some fun with it. Jacob has several kids on his team who are in his grade at his school but not his class and he has become good friends with them, greatly expanding his social circle. Saturday afternoon after soccer, we ended up with about 10 kids running around here slinging Yu-gi-Oh and Pokemon cards. He loved it. On the field, Jacob plays like a crazy man, he is pretty goods, but he ahs a couple of pet moves he goes to whether appropriate or not. One is sort of a sliding leg stop – I keep telling him to stay on his feet. He did it once a few weeks ago in the right context and it was brilliant, but now he is just becoming a hazard. His other prize move, which he says he learned from Bryan Mera is a backwards pass. It too is a nifty move when used properly but he does it all the time, including when he is flying down on 2 or 3on 1 break.

Soccer has also been good for me, as it turns out. Scott, the head coach of J’s team who I described accurately as being nutty in an earlier post turns out to be a really nice and well-connected guy. We saw him at Rosh Hashanah services, leading Jacob say to me, “I didn’t know they were Jewish,” while Scott’s son Samuel said the same thing to Jacob. Scott is originally from Flint and played soccer at Syracuse with Gary Anderson. And he is the head of Ogilvy PR and Marketing’s Beijing office and knows everyone in town. He has introduced me to a bunch of good connections both personal and professional already, including a potentially good guitar buddy.

Saturday night we went out with Kathy Chen and her family for Malaysian food. We have been to this restaurant once before and really liked it. It is a very nice and sort of elegant place that recently opened not too far away, right next to Mrs. Shannen’s bagels. Jacob absolutely loves the wings there, as well as the barbecued corn. It is amazing to watch him tear through a whole huge plate of wings, licking his lips and exclaiming their greatness. Few foods not covered in chocolate have ever inflamed his passion so. We ate and ate, ordering one dish after another, in part just to keep trying things. And the total was 477 RMB, less than $40 per family. That was a $100+ in New York.

Sunday we decided to get our haircuts and headed across the road to Quan Fa, a mostly Chinese compound where we have several friends. Rumor was the clubhouse there had good and cheap haircuts. Eli and I went under the scissors. Jacob refused. His hair is getting really quite absurd now, especially with the humidity decreasing and the curls unkinking a bit. They have school pictures this week and Jacob will be wearing his “best dressed” – Dulwich logoed blue blazer, white dress shirt and striped tie. A haircut seemed in order. He initially said he would get a trim, after some bribing (haircut = three packs of cards). But when we got over there, he got real weird and wiggly and started muttering about it being our fault because we never brush his hair and he promises we can brush it as often as we want, but no cut. They will give him flat hair, like all the Chinese people have, and he doesn’t want to lose his curls. His hair has somehow become a huge part of his identity and given how well he is doing, we did not want to rock the boat. So he will be photographed Weds. with nutty but brushed hair.

Eli and I got really pretty nice haircuts, for a grand total of 50 quai, including a wash and scalp massage for me. That is about 6 bucks. Eli looks very handsome. The guy took forever though, and E was really squirming. I think he though the longer it takes the better job he was doing or something.