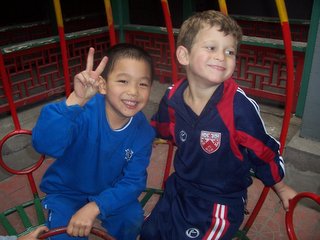 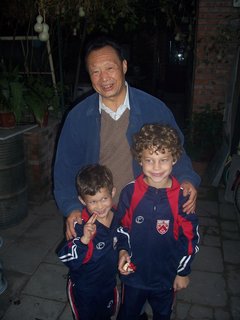 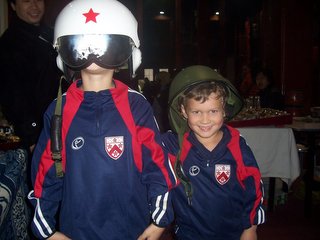 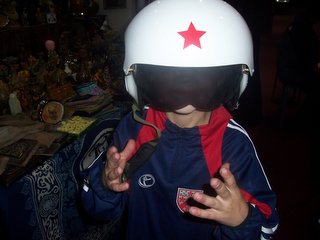 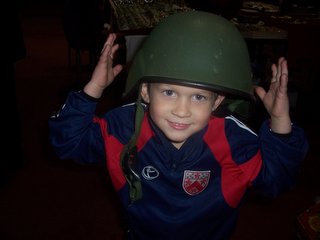 I have a lot on my mind right now, with some pretty heavy medical news from back home, which I am not quite ready to discuss publicly yet. I only mention it because it is very much on my mind and I’m having a hard time focusing on this other stuff. But the show must go on, and avoidance is as good an approach to something you can’t control as anything else. So sorry to be so vague for now, but that’s how it must be. Now, off we go…

I took Jacob and Eli out of school early Weds. to head downtown and go on a hutong tour. Monica Langley, a Journal reporter from the states, was in town with her husband and 7-year-old daughter and they invited us to join them so I figured why not? All the way down there, on our hour-long carbide, Jacob was complaining that he was hungry, he would rather be at school, he was missing recess, this is stupid, his friends were doing this and that, why couldn’t he go to Felix’s house? I was getting really annoyed, because I had stumbled all over myself and skipped lunch to get these guys down there for what I thought would be a special time with dad.

We got down to Houhai Lake, found the other guys and our guide Raymond and grabbed a few pedicabs for our tour through the hutongs, which are the old style, courtyard homes, mostly about 800 years old, which used to cover Beijing and have been largely torn down. I have gone through them on a bike a few times and it is always cool and interesting back there. But I had never done one of these popular tours, where you ride around in a pedicab, go into houses, etc.

There are a lot of them riding around in there and I felt a little awkward at first, really like a tourist. And Jacob was continuing to whine every time we passed a little stand, “They had candy there! Can’t we stop?” But as we moved on, it was a lot of fun and the kids really came around. We visited a preschool/kindergarten and Jacob and Eli ran around the playground a bit and played with a few kids, as pictured at the top.

We went to the Drum Tower, a high, 600-year-old stone tower filled with giant drums, which used to be used to mark time. They do a drum show on the half hour, which the kids enjoyed. They also had some little tourist shops up there, including one selling old military surplus items. That’s where Jacob and Eli tried on the helmets. Jacob really wanted to buy the jet fighter pilot helmet for Grandpa Hal.

We finished the tour by stopping into a hutong to “see a real home.” It is an inherently awkward thing, but there was this very nice old man showing us around. We went and sat in his tiny living room, with his tiny kitchen off to one side and his tiny bedroom off the other side. They have a little potbelly stove in the middle of the room for their heating. The kitchen had a two burner stove run by propane. Jacob bounced around on the couch and said, “What do we do now?” We spoke with our host a bit and then went out to the courtyard. His two sons lived across the way.

They had a big stack of coal for the winter lined up against the wall. It comes in discs that look sort of like three hockey pucks stacked n top of each other with a sort of honeycomb on each. I picked one up and was surprised by its lightness. You now see the big tricycles work bikes pedaling around town with the backs stacked up with this coal. Clean burning it is not.

Back in the courtyard, our host picked a pomegranate off a tree, ripped it open and handed it to us and then two things that made the whole day worthwhile happened. First, Eli very crisply and clearly said, “shia-shia” (thank you) which cracked up the guides and made the old man smile broadly. I told Eli to ‘sing his song” and he launched into his Chinese friendship song loud and clear the old man knew it and sang along with E. it was just the sweetest moment and I was really proud of E. He loves speaking Chinese. I think he is going to pick it up quickly.

The other thing that happened is Jacob eyed the split open pomegranate wearily, like Stymie of the Little Rascals eyeballing an artichoke after running away and going days without food, before finally declaring, “It may have choked Artie but it ain’t going to choke Stymie.” I urged Jacob to try it and he finally, reluctantly stuck the tip of his tongue out and just graced one bright red seed. “Mmmm” A little smile cracked. “I like it. Can I have yours?” We headed back to the pedicab and he ate the whole fruit, then asked me to buy him some more.

It was good that we had these very nice moments because the trip home was pure hell. We got in a cab at around 5:30 and we were pretty far south and West in town, while we live way Northwest of the city center. We slogged through traffic almost all the way back and the pollution was horrible, the cab was belching it and Eli was crawling all over my lap. I felt very anxious but didn’t let on; forced artificial calm is one of the best things about parenthood. Jacob kept himself occupied playing a car-racing game on my cell phone but the battery was dying. Then sitting bumper to bumper still not half way home, I heard the dread words from Eli.

Somehow, my distraction technique worked and we played along, spirited game of I Spy while continuing to inch forward. He made it home. The trip took close to two hours.

Music listened to while writing this post: Ray Charles, Jazz and Blues. “Rockhouse, Parts 1 &2” is one of my all-time favorite tunes and hearing Brother Ray play a real piano is a treat. Check it out. This is essential music.

We Passed Jacob lost another tooth
Scroll to top