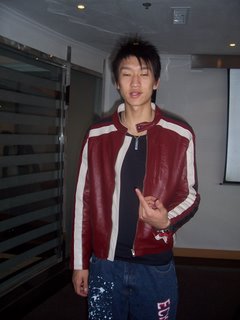 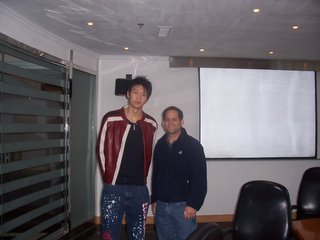 It’s hard to describe how happy I was when I went to the gym this afternoon, got on the bike, flipped on the Tv, turned to Sports Plus to see if any football was on and stumbled onto the Pistons/King s game — on Pistons TV no less, with homer announcers. They looked great, too. I was so enthralled, I hit the treadmill after the bike so I could keep watching. The Pistons look to be in prime midseason form.

Yesterday, I also did my first real Chinese interview here, with basketball player Sun Yue. He is a 6-7, 20 y.o. point guard who may or may not be the next star to come out of here. Hard to say. I haven’t seen him play yet and the reports I’ve gotten are really all over the place. But he is definitely a 6-7 lefty point guard who is quite athletic, can get in the lane and is now on the National Team throwing alley oops to Yao Ming.

I took one of my Chinese teachers, whom I really like and who speaks great English with me as a translator. On the way there, he told me he had never translated before and doesn’t know anything about sports. That did not seem like a great sign, but Wang Dong did a great job. Or at least I think he did. How do you really know?

The interview took place in the office of the Aoshen Olympians, on the 22nd floor of a downtown high rise. A very modern, quite fancy building that would be quite at home on 52nd Street and Sixth Ave. We got out of the elevator and turned left into a sort of atrium filled with beautiful, tall young woman strutting around and some bad techno music thumping off the glass walls. It was some sort of model show. A guard ran over and Dong spoke to him and he directed us the other way. We walked down the hall, with the guard following us and asking us our business, who we here to see and seeming quite nervous. Then the handler for the team appeared, waved off the guard and brought us into a mostly empty office suite. Certainly no one offered us anything to drink or anything like that. It was also really cold, so we all kept our coats on. It didn’t seem much like the place was used too often.

We sat down at big corporate table in a big conference room and this guy, about 45, was smiling big at me and said, “Let’s begin.” So I started interviewing him while thinking, “Oh my God, are they not bringing sun here at all? Do they think I just want to talk about him rather than to him?” so I asked some questions with Dong very officisiouly handling it all and the man, who was identified to me as a “running and jumping coach” answering with a smile and going on and on about how Sun is not only the team’s best player but China’s brightest hope and a real NBA candiate. The opinion about that is quite split amongst those to whom I have spoken. At this point, he is not even starting for the National Team. Finally I asked him if Sun would be here sun and he said “Oh yes, he’s here. Do you want to talk to him?” Uh, yes. Was he waiting for me to ask?

He walked out and a few minutes later Sun appeared. He is bigger than I thought he would be. Apparently, the chinese haven’t figured out how to lie about bball players’ size yet. He is definitely a legit 6-7 and was much broader than I thought he would be since one of the big raps on him is he has to gain upper body strength, He has stylish hair and little crucifix earring in his left ear. He was wearing some sort of designer faux spray painted jeans, a silver necklace and a butt-ugly maroon leather coat. Apparently, bad, expensive fashion is not exclusive to American prodigies either.

He spoke softly and mumbled a bit – a lot of things are the same about 20 year old basketball prodigies all over the world – and spoke largely in cliches. You think you get sick of hearing jockspeak in America? “Take it one game a time.. it’s all about winning and losing… whatever coach thinks is best…” etc… Well, you should hear jockspeak over here.. “Whatever the team needs.. The country comes first.. Of course I have dream to be NBA player but I must be good enough first” And on and on.

When I asked who his favorite player was, Sun answered directly and quickly without waiting for a translation: “Lebron.” I couldn’t quite tell if he knew what Slam was and I’m not really sure when or if I will even write about him in there anyhow. I started trying to get a hold of him a while back and ended up writing about another kid instead, 7-foot national team center Yi Jianlin. But that’s another story. I will use the Sun interview in my next That’s BJ column and then see what else I do with it. It is sort of an interesting situation. His team was kicked out of the CBA (chinese Basketball Association) and is playing this year in the ABA, an American minor league which barely exists despite its illustrious predecessor and namesake. I will definitely write about this more somewhere. If you have any suggestions, let me know.