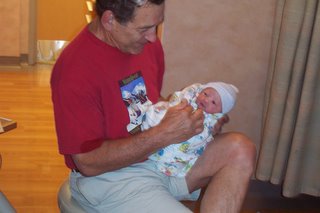 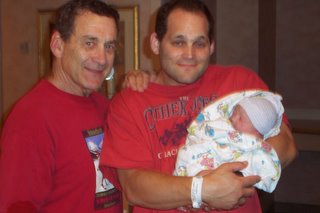 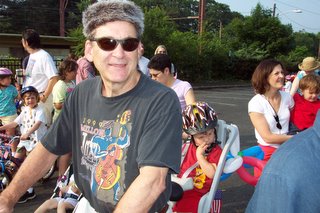 Dixie with Anna bout an hour after she was born. The other is him leading Eli and Jacob in the Maplewood fourth of July parade two days later. I would have used an action shot of Dixie leading his band, but I don’t have one on my computer. he’s probably had a baby in his hands for more hours than he’s had a trumpet anyhow.

My dad Richard Paul aka Dixie doc turns 70 today. Maybe the guys in his band will finally stop calling him “the Kid.” Now there is some explanation and excuse for his eccentricity. I could go on with one-liners for hours. I’ve often said that roasting Dixie is like shooting fish in a barrel. There is just so much to choose from.

You could start with him stripping down in the parking lot of a senior citizens early bird special place diner in Bradenton, Florida to sprint nekkid into the Atlantic. Or with him asking Pirates pitching coach Ray Miller for help with his curveball (response: “How do you grip your heater? Cross seam or on seam?”) Or him using his time in the witness stand in his highly charged suit against Blue Cross to advertise his newly released CD. Or inviting all the jurors at his (successful) malpractice suit – the one after he retired, which everyone in the world advised him to not pursue – to his upcoming gig. Or the fact that a few of them actually showed up. Or the time he spent 24 hours prone in a hospital bed with a catheter inserted and when he left, every employee on the floor knew about his gig the next night. Or the fact that he actually showed up and played.

It’s really endless. I’ve heard Dixie described as a character countless times and while clearly true, it is just as clearly inadequate, like describing a bear as “ a furry animal.” More centrally, he is a character with character; he is impeccably ethical and honest. And that made at least as big an impression on me growing up as the other stuff. Just one example: I vividly recall coming back from the country crib one Sunday afternoon. We called Aiello’s before getting on the turnpike in Donegal (in those pre-cell days, the call was made from a pay phone) to order a few pizzas so that they would be ready for pickup when we arrived.

Alas, our 10-mile TP journey became endless thanks to an accident. Traffic was completely s\topped. We got out and tossed a football on the road. By the time we arrived in Squirrel Hill, the pizzas were well past their desirable stage but Dixie insisted on going up there to pay. I was in college then and I thought that was nuts but he insisted, saying we ordered them, they made them and we had to pay for them. It’s a small tale, which he almost certainly does not recall and it’s not nearly as entertaining as a million others I could tell, but it gets at something true and profound. I saw Dixie behave like that my whole life and it seeped in, and quite likely pulled me back from the edge of criminality.

Dixie is a complex guy, simultaneously old fashioned and bound by a code of ethics that is sadly outdated in much of our contemporary world and completely unfettered by most societal norms or expectations. It’s the same sort of internal code that I think I live by and it’s impossible to say if it was genetically imbued in me or if I picked it up by watching him all these years. In the end it doesn’t really matter.

The truth is, Dixie didn’t have a terribly happy childhood for a bunch of reasons and once he turned 30 he became determined to live it all over again, with more control and a better outcome. Which is why he was generally as much fun to play with as any playmate any of us ever had. Now that I have fully crossed over the great divide and actually consider myself a father first and a son second, I can fully appreciate the beauty of this. And appreciate the significance that as we all sail towards middle age and Pop Pop officially becomes an old man, there’s still no one better to have a beer or watch a ballgame with. And there is no more mischievous troublemaker you could possibly conjure up.

So Happy Birthday Dixie. Sorry I can’t be with you. Sing “Bill Bailey” for me and remember that George Bernard Shaw was right when he said, “A man of great common sense and good taste – meaning thereby a man without originality or moral courage.” And he was wrong when he said, “Hell is full of musical amateurs.” Just don’t ask mom about the latter.