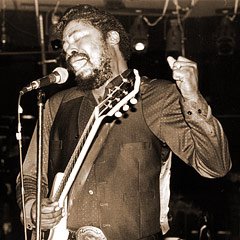 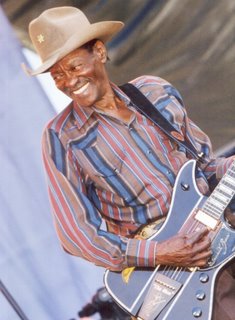 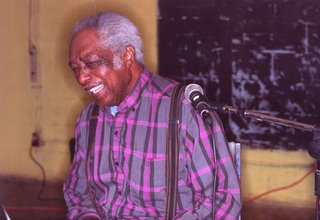 An obituary for three great blues guitarists who recently died, from the current GW. Below that I will paste in an obit for Son Seals, from about six months ago.

Gatemouth, Son and Milton were three of my favorites. I can’t honestly say I listened to RL Burnside a ton. One of the proudest moments of my career was managing to get a glowing Gate review into People. That felt really subversive to me. When I flipped open People and saw a big color pic of Gate and knew it was there because of me, I felt really warm inside, like I had really accomplished something.

In college, I got really into blues when I worked at Rick’s cafe, which had Chicago acts most weekends. After seeing most of the regulars a few times, I started to notice their schticks and how they would coast at certain times, how the lead guy would allow the rhythm guitarist to play tricky licks while taking credit, things like that. But none of it applied to Son Seals.

That man was serious as a heart attack. It’s pretty standard for the band to come out and play a song or two before the front man emerges. Most guys used that as a time to drink, hang out, whatever. Son would come out to the side of the stage and smoke his pipe while watching the band sternly. Those guys played hard and tight because they knew the boss was always paying attention and really cared. I saw him once after he had his leg amputated nad he was just as fierce as ever.

Gate was also a Rick’s regular and also put on a great show. One time he was late and the word was he hadn’t shown up in the lobby of the hotel and wasn’t answering his phone. Someone went up to get him. Concerned when he didn’t answer the door, they got a manager who opened the door and found Gate, probably 65, in bed with a young chambermaid. Or so the story goes. He also constantly smoked weed in a little pipe which most people assumed was tobacco. He was a great picker and a true character.

Milton would come out on stage in a glitter gold lame suit, fronting a big, horn-infused band. I saw him a few times over the years on bills with Bobby Blue Bland and B.B King. Milton was always the opener. These dates went back decades and decades to the chitlin circuit. While b.b. became a superstar and Bobby Blue somewhat rose above the old all black clubs, Milton remained chitlin circuit to his core. I saw a emmorable show atthe Apollo a long time ago and saw him a few times over the last few years with the Allman Brothers. He was one of Gregg Allman’s three main vocal influences, along with Ray Charles and Bobby Bland and Gregg always seemed to really enjoy having him on stage, though it was all facilitated by Warren Haynes who had become close with Milton. Gov’t Mule backed him on a track on an album a while back.

The funny thing about when Milton would come out on stage with the Brothers is he just took over and they became his backing band. That’s what he was used to doing and he just wouldn’t come out as a guest. It was fun to see and usually quite good, though Warren was always maneuvering the band away fro train wrecks trying to follow their idiosyncratic new leader. Last March, I went to an epic ABB show at the Beacon with Art, Rodger and Per. It was a really great, memorable night, both for the music and the company I was keeping. Anytime you can see your favorite band with three of your best friends, you’re way ahead of the curve. The highlight for Rodg was Milton all the way.

The blues world lost three of its leading old school figures in one month when Clarence “Gatemouth” Brown, Little Milton and R.L. Burnside passed away in August and September. Though the three were vastly different, they were linked by their lifetime of dedication to guitar.

Brown, who played fiddle as well as guitar, hated being called a blues player and indeed, he also played swing, jazz, Cajun and country. “Folks call me a bluesman because I’m black and… play guitar,” Brown once said. “But my music is American music – Texas style.” He had a 1954 hit with the hard-charging, fleet-fingered instrumental “Okie Dokie Stomp,” which helped launch a 50-plus-year career. Brown was diagnosed with lung cancer, heart disease and emphysema last year but he refused treatment and continued to perform. He died in Orange, TX two weeks after evacuating his home in Slidell, LA, to escape the path of Hurricane Katrina. He was 81.

A pioneer in mixing r&b and blues, “Little Milton” Campbell was a strong-voiced singer and a pungent guitarist in the B.B. King mold. He had several ‘60s hits for Chess Records and recorded the latter day staple “The Blues Is Alright” in ’84. He was a five-decade staple of blues clubs and festivals and in recent years, he occasionally appeared with the Allman Brothers Band. He was 70 years old and died following a massive stroke.

Burnside’s droning, hard-edged songs were the very definition of “Mississippi hill country blues.” After decades as a noted juke joint performer around his Holly Springs, MS home who made his living primarily as a farmer, Burnside began to find a wider audience after being featured in the 91 documentary film Deep Blues. He then began recording for Fat Possum Records, and his numerous albums gained an alt-rock audience, which helped him become one of blues’ most popular performers in his 70s. He was 76.
–Alan Paul

R.I.P. Son Seals
The mighty Chicago bluesman Son Seals died December 20 of complications from diabetes. He was 62. Frank “Son” Seals was born in Osceola, Arkansas and grew up in his father’s juke joint, The Dipsy Doodle, hearing legends like Sonny Boy /Williamson before he could walk. By the time he was 13, he was sitting in on drums and a few years later, he was on the road, playing guitar with Earl Hooker. He later drummed for Albert King, before settling in Chicago in ’71 and focusing on playing guitar and being a frontman.

His debut album, The Son Seals Blues Band, was released in ’73 and it helped establish both him and the fledgling Alligator Records as forces to be reckoned with. He recorded seven more albums for the label. His final work was 2000’s Lettin’ Go (Telarc). Throughout his 30-year career, Seals’ work was absent any pretense or fluff, marked by intensity, high energy and a complete; his music sounded entirely unforced, like an extension of himself.

In ’97 Seals’ wife shot him in the face and he endured extensive reconstructive surgery. Two years later, his lower leg was amputated but he continued to perform with the same unflaggingly fiery approach until just two months before his death. Phish often performed Seals’ “Funky Bitch,” and the guitarist appeared several times with the jam icons, turning a new crop of fans onto his powerful appeal. He is survived by a sister and 14 children.
-Alan Paul