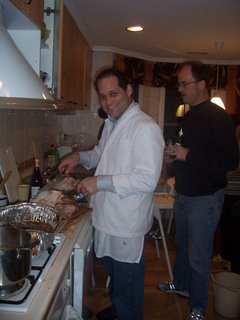 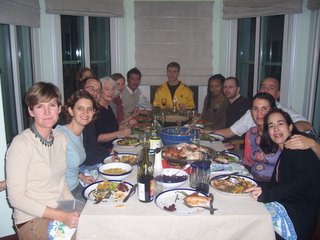 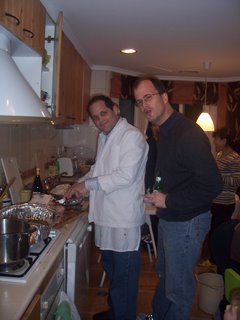 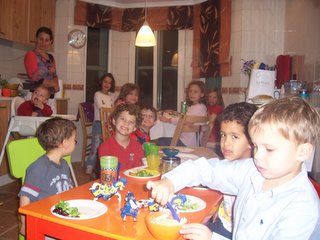 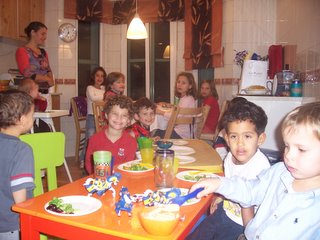 Thanksgiving was a lot of fun. We had 26 people here, 13 adults and 13 kids, mostly 5 and under. Several people were experiencing heir first Thanksgiving, and they all really enjoyed it. We had representation from China, Israel, Bolivia, Austria , Ethiopia and London. My Chinese teacher Wang Dong came as well as Shei Oster, new to B’s office and his girlfriend. The rest of the folks were Riviera residents and neighbors, including the yardleys, who sort of co-hosted. It was our house but they supplied a lot, including a second turkey.

We had traditional turkey, which was damn good. I followed a simple recipe from Epicurious – equal parts paprika, garlic powder and salt made into a paste and rubbed all over the bird, then just roasted it long and slow. We didn’t have a baster so we iprov’ed by pouring chicken broth over and that seemed to work well. The bird was really mist and tasty.

I also made a stuffing recipe we picked up from Epicurious, with country bread, pine nuts and raisins and a bunch of other veggies. It was delicious. We made a Stove Top and threw it in to the bird as well. Others brought potatoes, sweet potatoes, string beans, salad and, of course, lots and lots of wine. I supplied the endless Tsingtao beer. Mr. Li made us a pumpkin pie from fresh pumpkin and an apple pie on Weds. night. It was all delicious but, as always, the company made it and we had a really nice night.

Its kind of funny but this is one of the firs things that has really made feel like an adult. You’d think somewhere along the line to having three kids, something else would have kicked in, but I still feel like I belong at the kid’s table. But this is the first time I’ve ever hosted Thanskgiving rather than just reverting to being a kid, and there I was at the head of the table.

I certainly missed family and being in Pittsburgh, and seeing everyone but it wasn’t too bad. Jacob felt it most acutely. When we were going to bed, he said, “Thanskgivings at home are way better than this one.” I asked him why. “Well, this was fun, but it was just like a party. It didn’t seem like Thanksgiving.” The kid is smart. That could only mean, “Where the hell is the rest o fmy family?” so I asked if he missed his family and he said, “Yeah, especially Pop pop and Grandma Suzie.” Which makes sense because that is who we have had Thanksgiving with the last few years. I told him it was okay to miss your friends and family who are far away and still be happy and feel good about where you are and that I do so all the time.

He has been going though a bit of a homesick spell lately. About two weeks ago he and Eli both started complaining about missing stuff. It is really funny, too, because Jacob always says “New Jersey” as “this is better in new Jersey” while E refers to our homeland as… England. “When are we going to England, dad?” I guess because we speak English. Maybe because several of his friends are Brits and have probably been talking about going back to England.

Eli was feeling so homesick at one point he said, “I miss everyone in England. Even the adults.” As Steve Goldberg pointed out when I told him this, it must be really bad when they miss the adults. He ticked off on his fingers all the friends he wanted to see when we went home… “Jackson, Eli Gomberg, Ben Kessler, Jun, Luke, Lucas. Do I have another friends to see, dad?”

Jacob was more obsessed with missing our house. At one point in the bath, he pointed to some peeling caulk and said, “See our house in New Jersey is much better. That was particularly funny because the caulk in that tub is really peeling. He had already discussed this with Becky and he then said to me, “Do you know when we go back, we can’t even go into our house, even though it’s still ours?”

“Yeah,” I said. “But you wouldn’t really want to anyhow. Other people live there now and their stuff is there, not ours.”

Eli’s homesickness lasted a day or two and hasn’t really been mentioned again. Jacob’s has lingered a bit, though and pops up in odd ways. I picked up some pencils and sharpeners at the kite market last week. He needed them for school but the sharpener was terrible and the points got real sharp, then broke right away, no matter how we tried. He finally threw it across the room, sending shavings everywhere and saying to me, “See, dad? Nothing works right in China!” He has a point. All the good stuff is on container ships bound for Costco and Wal Mart. That same trip I bought a nail clipper that couldn’t clip.

Anyhow, Jacob is still mostly very happy and is thriving at school. They have a merit system where ou get one for particularly good behavior or work and every 10 you get an award at assembly – bronze, silver, gold. He earned his 10th today and is getting a certificate next Thursday and is very, very proud. He is the third kid and first boy in his class to earn his bronze (they just started it about 3-4 weeks ago).

Thanskgiving two is tomorrow (Saturday) at some friends’ house. It starts with a Turkey Bowl. Better late than never. Happy thanksgiving to all.