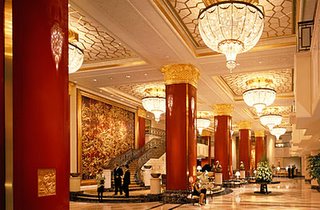 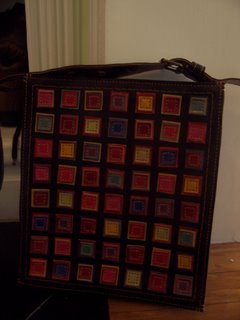 Pictured here are the lobby of the China World hotel and Becky’s new purse.

We took the kids to the wonderfully named FunDazzle on Saturday. It seemed like they deserved a little reward for all their good behavior and we hadn’t been there in months. (Click here to this old post if you don’t know what FunDazzle is.)

We had Jacob’s friend Lucas with us, because he had slept over. We walked in there and Jacob and Lucas were gone, off to play full-speed tag for hours. I heard a voice calling my name: “Eli’s dad! EIi’s dad!

It was Eli’s friend Donald from his class. They embraced, and bam E was gone. I saw there was a birthday party going on in a little room off of the balcony. Donald was a guest and he brought Eli in to have a drink. I saw lots of kids, most of them Western (Donald is actually Chinese) walking in and out wearing costumes. I walked in to check it out and see Eli. Someone called out my real name. I turned around and the host/father of the party came over and said hi.

It was Adam Pillsbury, who works at That’s Beijing and is the Editor of the Insider’s Guide to Beijing as well as the Kids’ Guide to Beijing, both of which we use often. We met when I went into the office last month. I chatted with him for a while and he and his wife were very nice and invited all our kids in to gorge on lollipops, pizza, cake, juice, etc. They made themselves right at home. As I walked out of the room, a three-year-old kid in full-on Hines Ward Stillers uniform toddled by me tailed by his father, who looked to be about my age and social class. I thought. “That has to be that Eric guy from Squirrel Hill I keep hearing about.”

I went up to him and said, “Hi. Are you the Squirrel Hill guy I keep being told to look up?”
“Probably,” he said, extending his hand. “I’m Eric Rosenblum.”
“Hi Eric, I’m Alan Paul, the other Jewish guy from Squirrel Hill in Beijing.”
“Oh, hi! I’ve been told to look you up by all my parents’ friends. It’s so nice to meet you.”
And so it goes. As eric’s wife Titi observed, it is always wear-your-Steelers-uniform-to-work day in Pittsburgh and the same principle holds sway for those of us in the diaspora, wherever we may be. It turns out Eric is actually from Steubenville, but he went to Shadyside Academy.

We chatted for a long time while watching our kids and few hundred Chinese youth run until their heads could fall off and then he invited us over to their downtown apartment for brunch the next day. We went and had a really nice time and I was sort of amazed by how many people we knew there. That is partly because he and his wife seem to be friends with an awful lot of journalists, but there were some folks from the Riviera, some from synagogue. Eric and his wife have been here for about 10 years and it amazed me how many crossing paths we already had with them. It was also a reminder that though we live in this sprawling metropolis, we actually reside in a pretty small little world.

Anyhow… after FunDazzle, we headed over to the China World mall. Becky has been over there many times for work, but never into the mall, which is underground beneath a large, top-end hotel and office building. I had never been in there at all, though it is right next to the Kerry Centre Hotel, where we stayed on our first visit here last April and where I have been a bunch of times.

We walked into the mall, went down an escalator and were standing on a balcony overlooking an ice skating rink. Eli immediately wanted to go down and try, as did Lucas, who just moved here from Switzerland and said he is really good at ice skating. My kids have never had skates on their feet. I felt a little remiss about that, especially when it became clear that Jacob wanted nothing to do with ice skating. Adamantly so.

We walked around a bit and the place is huge and sprawling and pretty damn confusing. Becky was looking for a leather store where Lucas’ mother had purchased a purse recently. We were dragging around all over the place. We had left our stroller in the cab we took downtown. It was Lu Taitai, our semi-regular driver, so we knew it would be dropped off at our house later, but I was carrying Anna around and trying to sort of drag along the other three, who were hungover and beat from the three hours they spent racing around FunDazzle like they had rocket propellers strapped on their backs.

All of which was to say, the trip to the mall as not without its stresses and discomfort. But what was really interesting for me was being immersed in the other China. It is really easy to have a lifestyle here where you mostly deal with expats with means (including many Hong Kong, Taiwanese and “returning” Chinese) and Chinese peasants, workers and domestic help. Then you go into a mall and see high-end leather stores, $1000 Chicco strollers, miles of makeup counters, lingerie stores, Benetton, 9 West… and 95 percent of the customers are Chinese. There are a lot of people here with a lot of disposable income.

Our group was sort of falling apart and I wanted to abort the mission and get some food and sit the kids down, but Becky was adamant – she wanted a new purse– so we pushed on. Anna insisted on walking, so I trailed behind with her while B plowed ahead with the three boys. By the time I straggled into the leather shop, Becky was purchasing the purse, Eli was flopping around the ground and Lucas was trying to staunch a bloody nose. Jacob was just sort of staring into space.

We loafed around the mall a bit more, checked out the ice skating and then hit paydirt, a Lego store, the first time we have been to any such thing here. The boys were really excited and Anna enjoyed playing at the table as well. We bought them each a smallish Lego and headed out. This kind of stuff is imported and is more expensive than at home, but still not that bad. Maybe 10 percent more. Compared to what we pay for other stuff, it does seem really expensive, though.

The one other thing that really struck me at the mall, especially when we passed through the makeup area and some other women’s fashion stores is that virtually all of the models featured in the billboards and ads are Western. That seems sort of sad to me and B concurs. It just seems a little self hating or something and rather absurd considering how beautiful so many Chinese women are. On a practical level, it also seems dumb, because I would think that a Chinese woman buying makeup would want examples of how someone like her might use it to best effect. But what do I know about such things?

We capped off the day with a nice dinner at a quasi fast food Japanese noodle shop, which the kids loved. Mr. Lu picked us up and drove us home and I was really glad we didn’t take a cab because he took a roundabout route to avoid the Third Ring Road, which would have been the most direct route but was apparently totally blocked because of Bush’s visit.

A lot of you have written asking my impressions of Bush’s visit. First thing you should now is our sources of information on it are the same as yours. I am, of course, embarrassed by our dauphin. I thought it was absurd that he came here for one day and went to church. I understand he was making a point but for whose benefit and edification? There are many, many human rts and other issues to take up here and relig. frdom does not seem to be one that is burning people up here from the inside, though others certainly are. That was a stunt clearly served up for “his base” back home. Maybe he can get the Dept of Education to send over some Intelligent Design textbooks.

At the same time, I have seen some on the left, notably Arianna Huffington, giving him a hard time about being so soft on the Chinese about hr issues. That is a tough call, but I don’t think he’s in a great position right now to come here and rattle his saber, humiliating his hosts. It was bad enough that he went to church and gave a speech in Japan praising T.wan as a bastion of democracy. So I think that is actually piling on and unfair criticism. I now am on the record defending W one time.

And no, Becky did not attend any events. the WH kept it very limited to WH reporters and the Journal had someone traveling with him. She edited the stories, though.

Music listened to while writing this post: a wide mix, including Albert King, “I’ll Play the Blues For You,” ; Johnny Cash, “One” – you must hear this now; Bob Dylan , “Shelter From the Storm,” : Jackie Wilson, “Higher and Higher”; Peter Gabriel, “Washing of the water,” Robert Cray, “Phone Booth” — easy to forget how good and promising he once was

Hanging in the "willage" You want pictures? You’ve got pictures.
Scroll to top