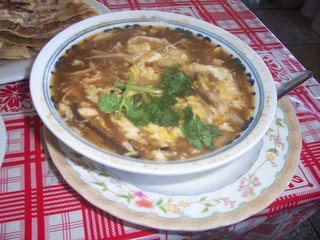 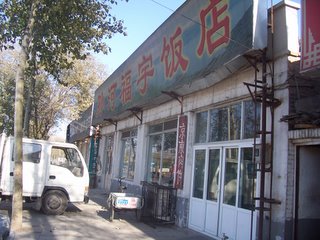 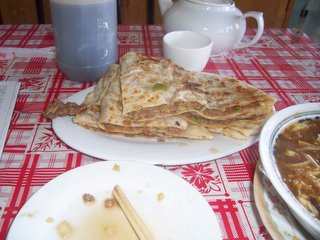 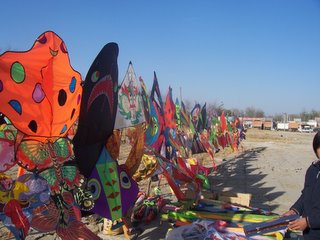 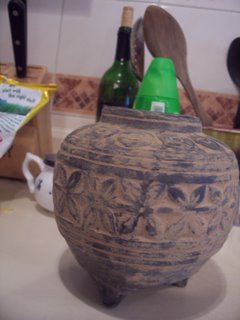 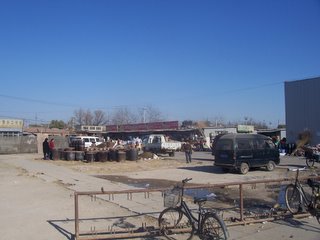 Pictured here are my favorite hole-in-the-wall restaurant and my meal there, the kite market in two different shots and a pot I bought there. The market actually looks like kind of nice here, because the kites are so pretty. It is really grungy, though.

The day after visiting “the other China,” land of high end stores and clean, antiseptic malls, I dove back into the other other China, in the form of a visit to the Wu Mei store and the kite market surrounding it. It is going to take all my descriptive skills to even attempt to describe this place.

Let me put it this way: Theo told me she used to go there all the time and has mostly stopped. She said her driver, who is a woman, quit hiding that she hated going and finally said to here, “Look, we don’t even go here, you know.”

It is on the other side of Jingshun Lu, the main road which runs North-South, just around the bend from the Riviera, maybe a half mile up the road and set back from the thoroughfare. There is no obvious way to drive in. You have to sort of pick a spot and go in between cars and little buildings and bump bump bump your way across a parking lot that is riddled with holes far too large to be prefixed by “pot.”

Inside there is a huge building. On the far right, in the back is the Wu Mei, a funny little store that has food, drugstore items, liquor and some other stuff. I bought the PBR there as well as some cookies and snacks for the kids. They have these little Pokemon drinking yogurts which Anna and Eli love and I haven’t seen anywhere else. But when I picked up a box of Orion Pies (Chinese ripoffs of Moon Pies) I noticed the price was the same as Jenny Lou’s the Western style grocery store where we do most of our shopping. So much for great local bargains. It is probably negotiable, though.

That is the only real store. The rest of the building and the larger, hanger-like structure next door, is a bunch of stalls, selling everything from basketball shoes to watch batteries, Tsingtao beer to produce, from meat to hardware. And everything in between. It is really pretty dirty in there. I would not buy meat and think twice about buying produce though that seems fine and you can wash it all. I usually soak anything not being peeled in water with a little dish soap for about 20 minutes, then scrub it. Someone told me to do that. I don’t know what it really does.

Outside, there are more vendors. On the side, there are guys selling pots, woks, hardware stuff, axes, hacksaws, you name it. I bought a new bike lock. In the front, there are some food vendors, selling things like scallion pancakes and a bunch of produce guys. In the very front of the lot, there are several rows of beautiful, brightly colored kites which you can see clearly from the road. (hence the whole place being called the kite market.)

I decided to walk over and check out the kites, which I had never done before. On my way I passed several people selling trinkets laid out on blankets. I stopped to look at some and was surrounded. I did some decent bargaining and got two porcelain pots which now house our Chinese tea, a wooden Buddha and a vase or pot of some sort. I think I actually like the stuff. Definitely the tea containers. My stopping to look, then buy prompted a few other people selling stuff to run up to me with their best wares, and some of the stuff looked pretty nice. But I had had enough. On my way back to the car, I bought some oranges, and saw a guy selling goldfish and koy.

I got back in the car and bump bump bumped my way out of there. I was hungry, amazingly having not lost my appetite in there, and drove just across the road to the little hole in the wall restaurant next to the Giant bike store, which I have described before. This place is really good, the quintessential joint you always try to find on your travels. I need to go there even more than I do. The place is always filled with workers, almost always men for some reason.

They know me now and basically start laughing when I walk in knowing I am going to point to someone else’s table and order what they’re having. The owner is a sort of beefy guy of about 45 and he thinks my ordering method is hilarious. And you know what? It works. I always get the meet and scallion pancakes, which are a house specialty. I know that because every single person in there gets them and they are really, really good. Yesterday, I also got a big bowl of what was basically hot and sour soup. It wasn’t that different from a really good version of what they serve in the States except it tasted fresher, with more tofu, more of those little pickled things and bits of fresh cilantro spiked throughout. Really tasty. After that, I drove back into exp[at china and went Thanksgiving shopping at Jenny Lou’s.