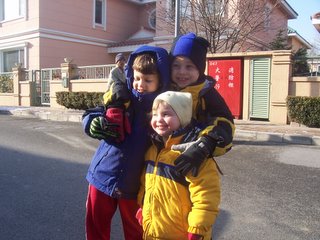 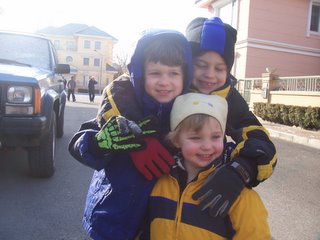 Well, I was going to paste Becky’s story in up here, which was about pollution from China leaving its borders and the growing international problems that is creating. But I can’t get it because wsj.com is suddenly not loading here. That started this weekend. Put it together yourselves.

They also had a great front-page story yesterday, which Becky worked on Sunday evening about a kid here with treatable leukemia not receiving leukemia because of $$. It’s a great story, and it has led to a huge outpouring of support and offers of money. People started sending money tot he Journal, so they then had to figure out what to do with it and how to set that all up. It is moving forward, so this kid will get the help he needs.

A friend here is sick and getting sicker and the docs can’t figure out what is going on. She went back to the States today for testing, leaving her husband here with their two young daughters. In respect of their privacy, I don’t want to say much more, but it is a really hard situation. Combined with my dad’s health and the WSJ story I just mentioned, we have really been counting our own blessings. It’s such a cliché, but so clearly true – nothing really matters except the health of you and your loved ones. I am really concerned for my friend here because some of the presented possibilities are quite dire. We are having them over for dinner tomorrow and will try to do so as much s possible while she is gone but I wish there as something more I could do.

Dulwich college is putting on this big Festival of Lights show next week. All grades are participating in two separate shows (one for k-first graders, one for everyone else) and it seems to be quite elaborate. Jacob and his class are reading Twas the Night Before Christmas and singing a bunch of songs, including “Santa Claus Is coming to Town’ and “The First Noel.” It really is odd to have such overtly Christmas stuff in the school, coming from our background. We can’t complain too much, however, because Jacob takes it all in stride and Eli’s class is actually doing Chanukah.

I brought a menorah into his class and as soon as I walked in, I was bum rushed by kiddies wanting to see and touch a real menorah. They are all fired up. Eli told me that they we re wearing “havarah hats” and lighting a giant menorah. They are also singing a Hebrew song. Hearing E sing it is hilarious. Hearing his whole class, two thirds of whom are Asian, belt it out while wearing kepas should be priceless. Not sure if any one is doing Kwanzaa.

They are really taking this show seriously, with two performances each, the two groups alternating matinees and evening performances next Tuesday and Wednesday. It is actually in keeping with the general philosophy of the school. They actually have a class called “performance’ instead of music, and I for one applaud it. Performance is a big part of life, and we all know it.

Sunday afternoon, after Jacob went to Sunday School, which he is now accepting and actually enjoying, I think, we headed downtown to the Bell and Drum Towers. The real landmark is that we drove down there. It was our first time venturing into the middle of town in a car and it was fine. The destination was sort of a mistake because they are largely outdoor activities, requiring a fair amount of walking and once again IT WAS FREEZING. Both towers require climbing up over a hundred almost vertical stone steps that are about 600 years old cold, slippery stone. Pretty interesting thing to attempt while carrying a kid. I had never been up the Bell before and didn’t realize it was outside, so we trekked up, then had had to come back down right away.

We crossed a freezing plaza and trudged up the Drum Tower, which is even longer, but at least we knew it as an enclosed room. Jacob did it on all four, very proud of his improvised technique. Becky carried anna and I ended up carrying E most of the way. On the way up, we heard the drumming start – they put on a show every half hour. Damn. So we had to wait 30 minutes, which wasn’t too bad because it was enclosed if not heated so only half freezing and there are some good tchotchkes up there, so we bought some Chanukah presents for cousins. And then the inevitable, from E: “I have to pee, real badly!”
“Ok, let’s all go down and leave.”
Jacob; “No way. I’m not leaving without seeing the drums.”
Eli: [jumping up and down] “I’m going to pee in my pants!”
Me: “Hold it in. Let’s go.”

He was terrified of the down steps, so I carried him. We made it to the bathroom –a self-flushing squattie! Then I carried him back up. Man, my quads were burning and I was panting. We saw the drumming. We went back down. Jacob started whining now, but we told him if we clammed up and gutted it out he could have a treat. We made it around the corner to our car and there was a “Quick” convenience store right there. We went in and they all bought a bag of candy.

We got back in the car and sludged through traffic to the Oriental Plaza Mall and went to the Sony Science Center there. Another new, cool indoor place. And the mall itself was pretty lux, much more so than the China World I wrote about last week. Burberry, Levis, Nike, Swatch, huge Starbucks. That’s just what I remember. It’s funny. We have been sort of deprived of that sort of stuff (which for the most part is a deprivation I welcome) so you go in there and it’s sort of overwhelming. Everything looks really bright and shiny. Again, I was blown away by how much disposable income so many Chinese obviously have.

Jacob very astutely noticed that this little Japanese noodle shop was the same place we found near China World and everyone loved. He noticed that the lantern light fixtures were the same. We ate there and mid meal, Anna said she had to pee. I picked her up and felt my arm a nd leg get wet and warm. I’m just keepin’ it real, man. A big part of being a parent is eating dinner with a pea-soaked sleeve and carrying a whining kid up 150 slippery ancient stone steps.

Damn It’s Cold! Portrait of the artist as a Young Man
Scroll to top