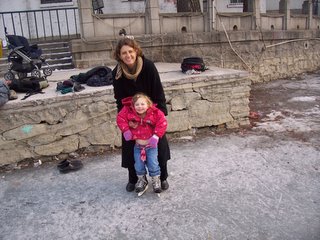 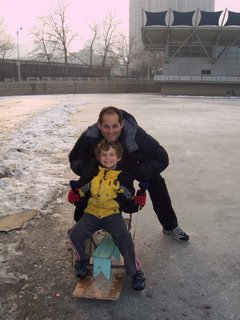 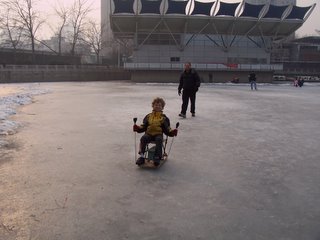 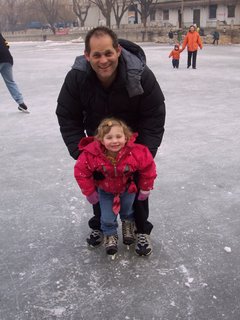 Firs things first: thanks to everyone for inquiring about Eli. He is doing better but is still limping around. He didn’t walk at all until he went to school on Monday. When I picked him up he was limping around proudly. But maybe he overdid it. Tuesday he walked little, and this morning he woke up complaining that his leg hurt and wasn’t walking at all when I took him in. The leg looks a lot better but it’s still pretty cut up and bruised. When he gets upset, he sort of cries and says, “I hate that stupid bike! I wish it was never invented.”

When he really wants to get me, he says, “It’s your fault, you never should have put me on that thing.” He knows how to hurt me. But he’s healing and I hope that he’ll be walking regularly by this weekend. Otherwise, I guess we’ll take him back to the hospital. If any of the docs in the crowd want to weigh in, please do.

The pictures here are from last Sunday. We went downtown and met Eric R. and his family to go ice skating. We were going to go to Houhai Lake, which is large and beautiful and filled with action, but decided to go elsewhere. This lake is right by the Blue Zoo aquarium, which the kids love and Eric knew it well. We met him and some other friends of his there. Unfortunately, it was the day of the Lantern Festival, the final day of the long Chinese New Year’s celebration, so the guy who rents skates and these crazy little ice skating chairs that are popular here was not around.

Eric and his friends had skates, including some extra kids’ pairs. Obviously Eli did not partake. I carried him around and he played in a little snow pile with Jacob and other kids and watched these guys ice fishing. They were pulling these little silver fish out and throwing them into a plastic shopping bag. I can’t even imagine what is in that water. Jacob has never skated and he is scared to try, unfortunately. I feel this is a parental failure. We should have gotten him strapped in years ago. As you can see, Anna did give it a whirl and seemed to like it, though she was basically just carried around by us, her fat little legs wobbling all over.

There was an older couple out there with their little grandson zipping around on a little skating chair. We were watching and he asked us if we wanted to try. I spun around a little with Jacob and then he booted me off and went wild. It was cool. The old man was really a master on this thing, making incredibly fast and tight turns.

The Blue Zoo features a very cool moving sidewalk that takes you right through the middle of a huge aquarium filled with sharks, eels, marlins, turtles – and mermaids! Yes, they have a couple of women in mermaid outfits swimming around and most of the Chinese people there seem to ignore the fish for the maids. Anna too. Really wacky.

After that, we went out to dinner, to a Belgian place Eric and his wife Titi knew. They had really good steaks, and I don’t know when I had one of those last. The kids ordered off the desert menu and were very pleased with the Belgian waffles. Anna went apeshit when the waitress came over and somewhat angrily took away the salt and pepper shakers she had been emptying on a plate. I finally distracted her with the lobster tank but it was tough. Anna is incredibly strong willed and sure of herself. It is going to be really interesting to watch her grow up. She already seems like she’s five, so what will she be like when she is 5?

As I said, it was the Lantern Festival on Sunday, a fact of which we were completely ignorant. We came back from Thailand and took down all the New Year’s stuff Mr Li had put up. We did keep up Ding’s red symbol, but we just sort of figured, “Our Chinese New Years holiday s over so the holiday is over.” Uh, no.

It ended Sunday night the Lantern Festival and all the fireworks in the previous few weeks were just a precursor. Sunday night was wild. We got into a cab after dinner and as we started heading home, there were fireworks popping up all over the place – to the left, right, in front of us, behind us. Years ago, Becky had to work in NYC on 4th of July, covering downtown festivities for Newsday or Gannett. We were down at the beach and I drove up with her and hung out in Battery Park all day with her, she filed her stories and that night we drove back.

It was really cool driving down the NJ Turnpike on 4th of July evening. We passed through one fireworks display after another. It was like that the other night, but all the fireworks were just being set off by regular people, no official displays or anything. Then we got home and the explosions just kept going all night, petering out around midnight when we finally went to sleep.

Now the holiday was really over and the next day by the time I rode home from taking the kids to the school the next day, the army of workers who put all the lights and lanterns up in the entrance way were out taking them down. Sorry I never got any good photos of that.