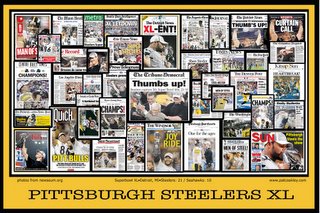 I had not received a single email about my Steelers column as of the other day which seemed puzzling to me. I was just certain that this one was really good and would have struck a chord with ex Pittsburghers if no one else. I inquired and was told that there was a problem with my email box and they were working on it.

Well, yesterday they solved it and I received a dump of messages.. dozens of them, most of them really touching, many from ex Burghers living all over the globe, including a Ligonier native in South Africa. There were also a couple from old friends who found me… one a friend of Eric R’s, and one from Tom Smuts, a friend from Reizenstein Middle School. It is so cool.

In many ways, I fel this column is the thing I have been waiting years to write.. finally to express some of my love for Pittsburgh. I’m not sure what comes next, but I am working on it.

I’ll post a sampling of the letters, beginning with one from the artist wh made the above collage. I replied and sent has sent me a poster, apparently creating quite a stir in her small town Mass. post office, with empoyees looking up PEE-KING. She is selling them on EBay. if anyone wants info on getting one, let me know.

Greetings from Massachusetts, home of the almost dynastic Patriots.
I so enjoyed your column in the Journal the other day that if you’d
like a print of this collage, I’ll send you one. I do them as an
adjunct to my business, mostly for the fun of it, but sometimes for
profit. But, I always send the first one to someone whose fervor for
their team matches those of us in Red Sox Nation. A breed apart most
believe, but I believe you and the other Steeler fans may get the
fervor award. Congratulations!

If you want me to send it to you, just reply with an address. It
will be a 13X19 print. There are about 41 newspapers included.

Does anyone know this guy, who grew up around the corner from us?

Dear Alan:
Loved every word of the Steelers article. I believe you capture the spirit and feelings of all of us who ,for various reasons , have left Pittsburgh (in my case Northumberland Street in Squirrel Hill.) I too grew up in Pittsburgh during the 1970’s and recently tried to explain to my officemates why the Steelers embody the soul of Pittsburgh and that they are somehow a part of those of us who grew up there. Thank you for a great article.
-Norm Krause
Ithaca ,N.Y

Here’s another good one:

You are what a Steeler Fan is ALL about!!!

Thanks for the article….

I am from Penn Hills and spent many a day at Murray and Bartlett in the
Hill. I attended payoff games in 78 and 79….I now live in Cleveland
and thought I had it tough living behind enemy lines and having to buy
Direct TV. There is no way to describe to the rest of the world the
loyalty that comes from growing up a Steeler fan and having to move
away.