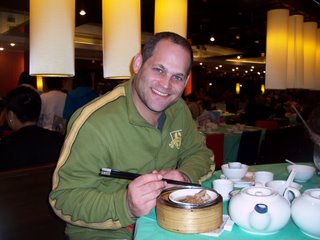 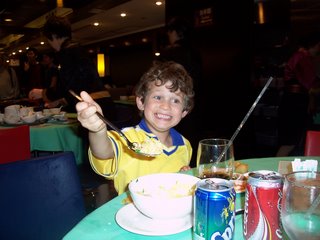 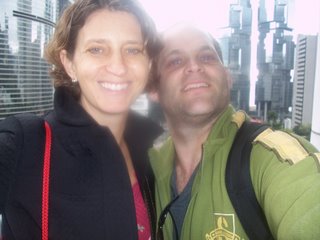 Hong Kong is incredible. Coming here from Beijing is like stepping from the Second World into t e first, leaping from early 20th century to late 21st. I feel like such a country mouse here – “golly, pa, they have iron horses here!”

We came off the high speed train from the airport into the city and as we went up to the street level to get a cab we saw a book store and we all ran in there, like people crossing a desert running to a stream. We all were grabbing books and card games and computer games and throwing them onto the counter. It just makes you realize how much we don’t do have that stuff in Beijing. I can only barely imagine what trips here from BJ must have seemed like 10-15 years ago.

We tooled around the island, went to the Peak, rode the cable car down, ran around th every lovely Hong Kong park.. and ended up going to visit and have dinner with Peter Jefferies, a colleague from the WSJ. They live in a cool neighborhood on the South Shore, on the beach… It feels like you are in italy or something.

Nice time and night which ended badly when Jacob lost B’s Blackberry at the restaurant (he had been playing games), followed by us searching for an hour with a flashlight while he sobbed, “I’m doomed… I’m grounded forever… I’m sorry… “

It’s late and I need to join the rest of my family in slumber.. these pictures do not begin to capture HK but it’s what I got… We had a great dim sum lunch. Eli loved the fried rice, saying to each shrimp he ate, “I’m sorry but I am going to eat you now.” Jacob was pretty grossed out but fascinated by the fish tanks, which did include several species of marine life I have never seen, notably hairy snail clams, as well as gigantic lobsters.. must have 4 pounds.