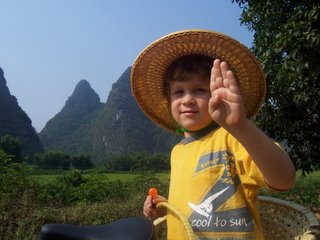 We are not out of the woods with Eli quite yet. His leg is about 85 percent well healed, but the remaining 15 percent is infected and looking pretty nasty though I have been assured it is a superficial infection requiring nothing more than cleanliness, anitbiotic cream and daily dressing changes.

Without going through all the gory details, the school nurse has been cleaning and changing his dressing and she advised me yesterday that it was now infected. I hadn’t seen the wound in days because she was taking care of it, well, I thought. I noticed that this week, he seemed to have taken a turn for the worse, limping a bit, waking up at night, though he wasn’t complaining of pain when he did. I took him to the hospital today, they removed the dressing and I almost fainted. He had a silver dollar size open pus hole.

The pediatrician called in a surgeon who examined it and basically said, “Why wasn’t this stitched up at the time of the accident? Uh, ask you r colleague. He examined him, pretty well I felt, checked his lymph nodes and declared it a superficial infection. Dixie called me mid-visit and I put him on. Always good to keep docs on their toes.

A couple of nurses came in and gave the wound a thorough cleaning. I held him down, one held his leg and the other scrubbed it out. I think that is what it really needed. It just hasn’t been cleaned like that. You can imagine his reaction. He did, however, recover quickly and the wound looked much better and less scary to me after this cleansing.

(Man, writing this is making me feel queasy and light headed all over again.)

I am taking him back tomorrow for another cleaning, as well as a tetanus shot. You have no idea how difficult it is going to be. I asked him today if he wanted to stop at the DVD store to pick a new movie since he was going to stay home from school. “no,” he said. “Just Home Alone IV.” The movie has been banned since he watched it last Saturday and then behaved like an absolute lunatic.

He watched it, no problem and we had a nice afternoon. I sat here and worked while he watched it, then we read some. Then we played hide and seek. Then he drew and I worked for about an hour and then we played and I took him up to school when it got out so he could see his friends and play on the playground a bit. Of course he and his little Korean friends Muny and Ethan played high octane Power Rangers games despite my admonitions to take it easy.

At some point today he also said china hurt his leg and he wants to go back home. “Call Jackson and tell him to get ready,” he said. “We’re going to the airport and flying to New Jersey tomorrow.”