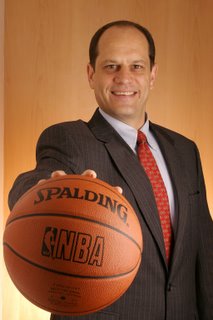 This will be in the April issue of That’s Beijing. In retrospect I certainly could have had some better questions prepared.

•The NBA in China really took off in 2002, when Yao joined the league. How much are the two directly related? If he had never appeared, where would the NBA be now?
It’s really hard to say. Yao is a tremendous guy and personality and he has added tremendously to the NBA’s presence here. He has put a Chinese identity on the league and you can’t quantify that. And he is a great individual as well as a great player, which makes him a perfect ambassador for the two nations as well as the game of basketball.

But the sport was already on the way up here. Yao Ming grew up watching NBA games on CCTV. Hakeem Olajuwon was his favorite player and that’s who he patterned his game after. We would still have had growth without Yao, and it’s impossible to know how much. The real turning point for the NBA here was when we started broadcasting games on CCTV in 1989.

•How do you deal with the fact that while you have a great product which people desire, it’s 6,000 miles away.
It is certainly a challenge to meet the demands of the great fans we have here in China for more NBA content. The way we’ve been doing that is twofold. First, the NBA is on the cutting edge of technology, so we are getting the game out on television more than any other sports league. We’re getting the game out on NBA.com China with scores and stats and info and we’re getting info out to mobile phones and now we are getting NBA games onto broadband, via a new partnership with Nusports. Through all of these means, we’re getting NBA games into people’s living rooms, offices and phones.

And the other thing is our associations with leading brands, which we are really expanding and strengthening Two and half years ago when we really started to focus on the China market — when I was repurposed to focus full time on China — we had two or three active partners. Now we have 15. We also have greatly expanded our grassroots events all over the country. Through all of this, we are starting to meet the demand for NBA games, but we have a lot of work to do. With a billion-plus people, demand is fairly insatiable and continued expansion is really in the cards.

•It’s not hard to imagine the Nu Sports site taking off in America were it offered in English. Do you foresee things you are doing here taking the lead for the NBA worldwide?
China is definitely ahead of the U.S. in some areas of new media. I am not the expert on this area, but what you are suggesting is certainly possible. With the NBA becoming so global there’s no reason we should not be learning from our partners all over the world. European players have helped teach American players some of their better ways of doing things and I think the same will prove to be true of some areas of technology and marketing

•How many employees does the NBA have in China?
About 30 in China and another 20 in our Hong Kong and Taipei offices dedicated to growing the game across greater China. We have more than doubled each year for the last two years. I don’t think we’re going to double in the next year but we probably will in the next two years. It’s just the way things are going. The sky’s the limit.

•In the summer of 2004, the Sacramento King and Yao’s Houston Rockets came to China for exhibition games in Shanghai and Beijing. How much impact did you see from that?
That was a big breakthrough for us because it showed fans here the real NBA game and everything that really goes on around a game. They had never seen anything like that before in China, for any event. Friends in the entertainment business here that have told us it was not only the best sporting event they had ever seen in China but the best event, period. Obviously, that was very gratifying after all the work we put in. The games made things real not only for the fans but also for the business and marketing partners we were trying to reach. They came to the games and said, “Wow. The NBA is where I want to go.” It’s self-propelling.