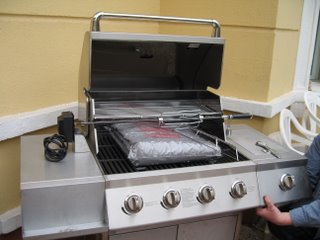 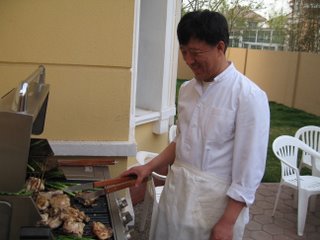 Life here often feels like one miscommunication after another. Sunday was a classic example. We had this party for Becky’s office, as discussed below. I bought a new bbq, which I had been wanting to do and this got me going. I spent some time trying to track one down and finally bit the bullet and bought a big, stainless steel four–burner unit from this guy who runs a business called Villa Lifestyles. They make these babies here and private label them and ship them to U.S.. They probably sell for over a grand at home. It was way less than that here but still a relative fortune.

I decided to make a big batch of slow cooked chimichaira chicken. Mr. Li works for other people out there and I have seen him drive in on Sunday nights. I wanted him to get me the meat if possible because he gets higher quality stuff at half the price.

I asked him if he were coming out here on Sunday. He said yes. I asked him if he could get me three whole chickens cut up, plus extra drumsticks. He said sure. He asked what time. I said I wanted it by 3. He said fine, see you then.

The whole conversation took placee in our standard chinglish.

He showed up with three big birds (about 3 bucks each), put on his apron, took out a cleaver and cutting board and started hacking them up. He finished. I thanked him. He sat down at the table and took out his notebook where he keeps tabs on how much we owe him for food, etc. I realized he wasn’t leaving. He thought we had hired him for the night.

Becky and I had already made a huge potato salad, corn and black bean salad and couscous salad. I had the marinade and dipping sauce ready for the chicken. There wasn’t all that much to do. I was going to thank Mr. Li and send him home., but then Becky and I spoke and we figured it would be nice to have an extra set of hands around because everything ends up being a little more time consuming than it seems.

And so it was. He made fruit salad, cut fruit for sangria, cleaned up, came out and helped me flip the chicken, etc. it was certainly nice to have help. The whole thing just seemed really funny to me.

Anyhow, the grill worked great and I did all the cooking, contrary to this photo. It went over very well, especially the chicken. I think the Chinese, and the guests were mostly Chinese, were rather baffled by the couscous. I asked someone to ask Mr. Dou what he thought about it. His response: “very strange food!”

It was a pretty big deal for Dou and Lily and some of the others to be feted inside the bosses’ house. As usual, I remained willfully oblivious about such things and just plowed ahead with food, drink and music. I also learned from speaking with the Chinese head of the Dow Jones translation service that my column is now translated in to Chinese for the Chinese language edition. I will track down a link and post it.

Kathy Chen has a baby, we have a party More pictures
Scroll to top