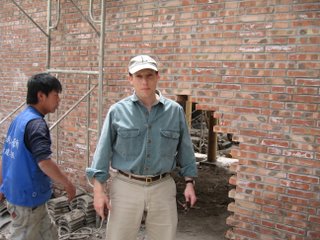 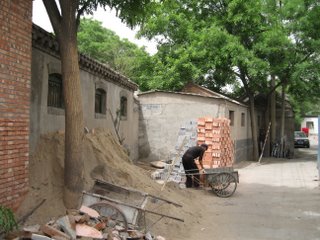 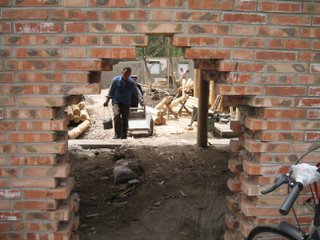 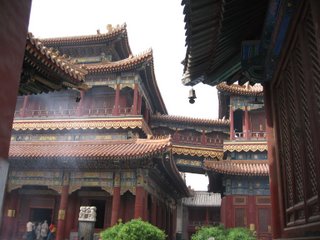 Speaking of John Pollock (see Big House post).. I met him last week in Beijing. He is a friend of Rodger Citron’s and he got in touch, s aid he’d be here, etc.

We met downtown at Houhai lake and I took him bike riding through old Beijing, around the lake, through the hutongs and up to the Lama Temple. It was the third or fourth time I had done that but the first since the Fall. I was happy to see I could lead it pretty well.

The hutongs are the old courtyard-style houses that used to make up most of Beijing and are being torndown rapidly. Theyare really a pleasure to ride through and hang out in, especially a couple of the quieter ones that are not overrun by tourists (mostly Chinese) in pedicabs… not that there’s anything wrong with them and I enjoyed taking theboys on a tour…

Anyhow, we cruised around, over to the Lama Temple, which was the Royal Buddhist temple system and is really beautiful. It includes a huge, huge, wood Buddha, about 8stories high and very wide, supposedly carved from a single tree. Very impressive. You are not allowed to photograph the Buddha, or any interiors.

Then we went to a great hot pot lunch. all this can be yours if you just board a plane and fly 13 hours.

For those of you Ann Arbor people, John Pollock is the son of Lana Pollock, former State Senator and a strong campus presence during our years. His father is Henry Pollock, from the Geology dept. We had a great time.

I am too tired to write more.