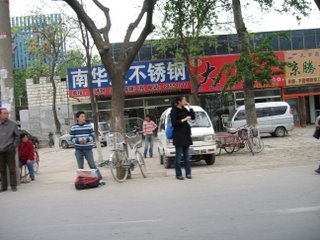 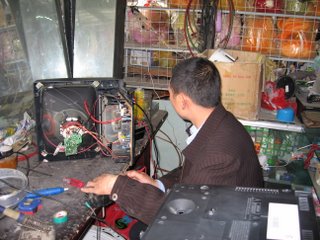 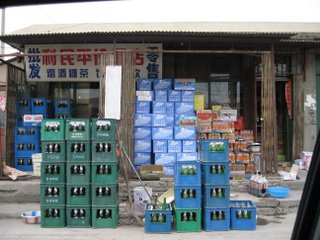 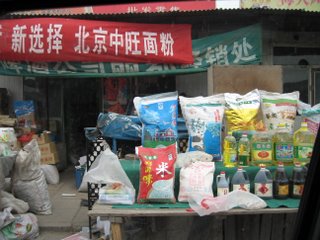 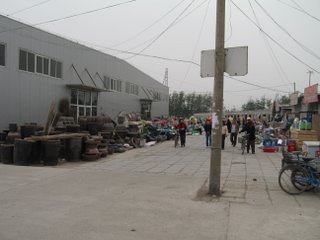 The top picture shows a bus stop across Jing shun Lu from the Kite Market. The next one is the guy fixing our TV. The rest are the market or adjoining stores.

I’ve written before about the crazy market down the road from us. It’s such a dirty place that after a year or two, Theo’s driver couldn’t handle taking her there any more and finally said, “Don’t you know we don’t go here?” Well, it’s being all revamped now so maybe it will be cleaner and tidier. I’m not sure exactly what they’re doing.

But I like going over there. It’s fascinating and full of life. We had a TV that needed to be fixed. It’s an American TV with a built-in VCR and we have some videos Anna really likes and there are no VCRs in China, so the thing is valuable to us. But Ding plugged it straight into the wall and it needs a transformer so it smoked and quit working.

I had seen a TV repair guy over in the Kite market and I wanted to bring it over. Last week I told Wang my Chinese teacher about the place and he offered to go with me. He said I had to talk a nd he would only step in when absolutely necessary. So off we went.

I carried the TvVback and found the right stall but we had arrived at 12:15 and the repairman was at lunch. In fact, almost all men were at lunch and there almost no customers. 12-1 is like a holy lunch time for Chinese. But there some women there and they said they would call him and he’d come over. So I dropped the TV down and we walked around looking at all the crap in the little stalls… everything from pens and notebooks to rice cookers, Dvd players, satellite dishes, lingerie, Gameboys and softcore porn DVDs. Not to mention axes, shovels, pots, pans, woks, watering cans, dishes, cups.. you get the idea.

So we waited and looked and chatted and went to get some fruit at a building next store holding all the produce sellers and came back. The women around the TV repair stand were fascinated by me but also by Wang and his ability to speak English with me. They looked at him like he was a wizard. They we were all migrants from other provinces, mostly Szechuan and Anhui.

He insisted that he was Chinese. I explained that he was my laoshi (teacher). They were impressed. They asked where I was from. I told them.

“Look how big and strong the American is and how skinny you are,” one of the woman said. ”That’s because in America they eat butter every meal. We only eat rice.”

Finally, the repair guy came back and dismantled the TV and said he though he only had to replace a transformer, which he did. But he couldn’t check it without me getting the transformer from home. So I drove Wang out to the street where he could get a taxi and went home and returned by myself.

“They’re ok,” Wang said. “Don’t worry.” That was high praise because he always warns me about the evils of Chinese people and tells me to be careful. Anyhow, I went back with the transformer and the Tv worked. He charged me 100 Rmb (about 12 bucks) and I carried it back to the car and went home. Anna has happily been watching Caillou and Busy Town ever since.

I took these pictures over there.