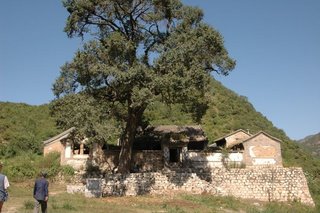 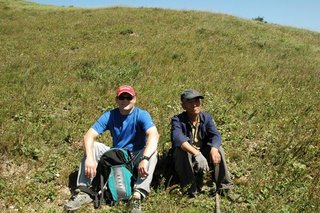 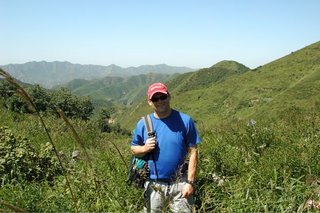 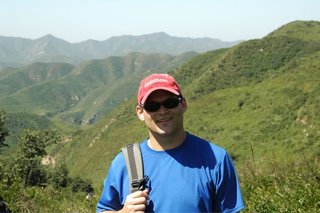 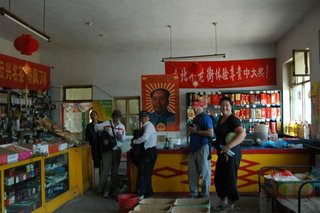 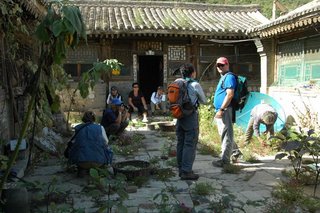 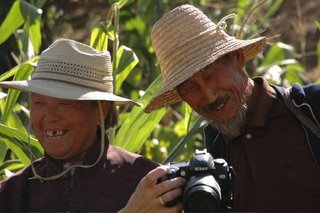 So the hike the other day was great. We drove a little less than two hours Northwest from here. About 45 minutes up the Badaling Expressway (north) then you get off and snake Northwest on twisty mountain roads. You come down into a beautiful valley. We were probably less than 60 miles from Beijing and I bet almost none of the people there had ever visited the city.

The road became very rural and pretty. There were walnut trees lining it and locals were walking around with long sticks for picking (or poking) the nuts. They were gathering them up and selling them in big bags being weighed by the side of the road.

We drove on into a really pretty small village. A couple of the ladies with us were Chinese, a couple more have been her a long time and speak very well. They got some of the village poop. It looked very old but was occupied by the Japanese in the30s and 40s and burned down by them\so everything was 50-60 years old. Everyone in the village looked elderly. All the children were gone, off to the cities.

Lesley’s driver went off the party secretary’s house to get us a guide. We all walked around and checked out the very pretty village while he was gone. He returned with our guide, a tiny little man who looked 70 but said he was 52. After bargaining us from 20 to 40 kuai ($2.50 to $5), he promised excellent service and we took off. He had no food or water and smoked constantly, one cigarette after another. On the way up the hill he had several severe coughing fits but just kept on keeping on, straight up the mountain.

Right up the hill just outside the village was a really beautiful old temple, pictured here. Unlike many similar places, neither the Japanese nor the Communists destroyed this temple. The guide said that in his grandfather’s time it was a temple but when he was a child in the 50s it had been converted to a school though there were still some monks around. It still had the same familiar courtyard temple setup you see around here and the center building still contained the Buddha statues you see in all the temples, though they were faded.

They used one back room to store coffins, including several large, decorative, festively painted ones in that were bright red and orange. I asked about that and someone told me that when an old person dies it is a happy funeral and they use these brightly colored coffins.

After leaving the temple, we headed straight up the hill. It was a pretty difficult hike at times though we were moving slowly and I never really got out of breath. I didn’t have any problems but one or two people were struggling up behind us. There was a lot of bushwhacking involved. It felt really good to be breathing hard, to suck clean air into my lungs and to feel the grass brush against my legs.

We got up tot eh top of the hill, onto a saddle, where we sat and had lunch. It reminded me of Wyoming, something like the Gros Ventre range by Camp Davis, though without white-capped peaks. We were right on the border of Beijing and Hebei, the neighboring province.

One woman with us pulled a beer out of her bag, which really impressed me. She said that she had founded the Singapore Hash House harriers. I felt like Homer Simpson. I had not been thinking about beer at all but couldn’t; stop then “Beeeeer!”

We hiked down the hill and into Hebei. The guide had a big stick with which he was beating back very high grown grass in parts. He said that was because there are a lot of snakes. We were in grass up to my armpits and I thought he had no idea where we were going, but we got back onto a path.

We got down the mountain to a gravel road. He pointed to the left and told us we wanted to go that way and said he was going the other way back around to his village, via roads. We walked left through sunflower and crabapple fields. We passed several elderly couples working the fields –one of them is pictured here, looking at a portrait of them someone else had taken — and came into a small village after 20-30 minutes of pleasant, easy walking.

The hikers had been there before and knew of a nice old woman. “da ma.” We stopped by to say hi to her. Apparently she had adopted several village kids over the years, including the daughter of the village idiot, but she was home alone. She lived in a rambly courtyard house. The central courtyard patio was beautiful because she had flowers and vegetable plants – eggplant, string beans, cucumbers — growing between the stones. There is a picture hereof all of us standing around this area. She said that she just threw seeds out and asked if we wanted any. She went around to the pretty flowers and started picking seeds for us. I took the plastic bags form my pbj sandwiches and put the seeds in them, keeping one and giving one to a fellow hiker.

Several piles of string beans and told us to take whatever we wanted. I filled a bag with beans and gave her 5 kuai over her strong objections. Another woman to whom she had given flowers and eggplants also gave her 5. She seemed embarrassed, went inside and started bringing out cucumbers squashes, gourds, more beans, insisting that we take them and being insulted when we said no. So everyone got stuff. I went in her house and looked around. It was packed and filthy, with a single light bulb hanging down from a naked threaded cord.

We said our tsai jiens and headed out. I was obsessed with getting a cold beer and the Hash House Harrier was right with me. We walked through the village, which was older and larger than the one we started in, past a few ladies hanging out and a bunch of men playing cards and got out to he road. There was a store across the street and down a bit. We walked in and stepped into 1963, a general store that sold everything from tools and hoses to giant bags of rice – and even cold beer. The large bottles of TsingTao (roughly a 32 ozer) were two kuai – a quarter!

I asked Wendy if she wanted to share one and she said, “Now, now Alan, you surely you can drink one yourself.” I did, and the first swig tasted as good as beer, or anything, can taste. I handed out a few swigs but basically guzzled that baby myself, singing inwardly, “Happy Birthday to Me.”

Check this out — thanks Jesse A little update
Scroll to top