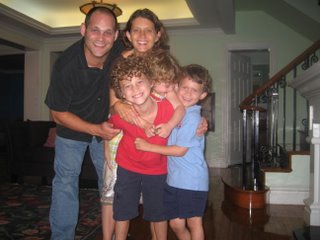 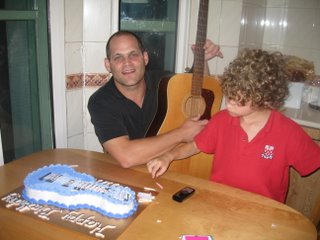 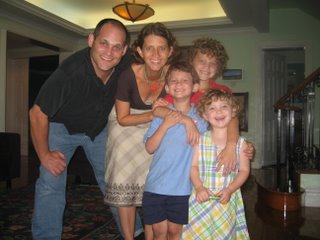 I had a nice birthday last week. Did the hike on Weds., which was my real celebration. Had a regular day on Thursday, even a Chinese class. That night we all went to dinner at Kagan, a nice Japanese bbq place downtown, which the kids love. I had forgotten how upscale and sleek it was. It was a great meal and a great time. Kids were reasonably well behaved. I felt good about the decision to all go out together.

We came home and had cake. Eli gave Becky the idea for a guitar cake. He had seen it in the book at the good but absurdly overpriced bakery when we selected his R2D2 cake. It was Jacob’s idea for me to get my axe and pose with the guitar cake with a guitar.

Eli wanted to eat the cake for breakfast, lunch and dinner the next few days. That as an unusual break from his usual carnivorous desires. He said he wants “meat salad,” which he described as “All my favorite meats cut up and put together – ribs, chicken, steak, meatballs, you can even put in bologna and salami.”

No one else loved the cake so much. I do, however, love these self timer pictures of the five of us, some of the best family portraits we’ve ever taken I think.

Hey, where’s my post about the hike I took last week? Catching up with summer Photos: Maple Mountain
Scroll to top