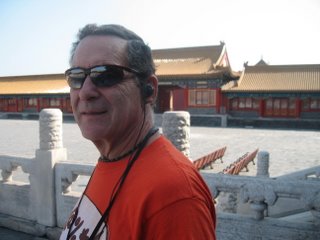 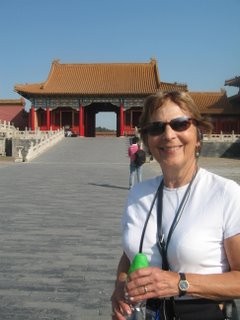 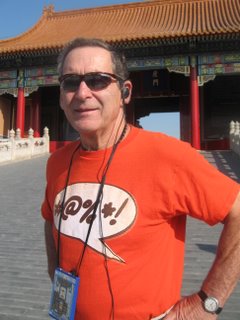 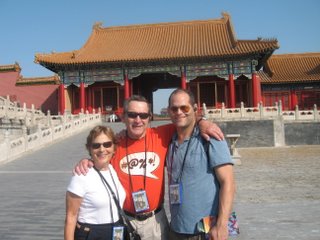 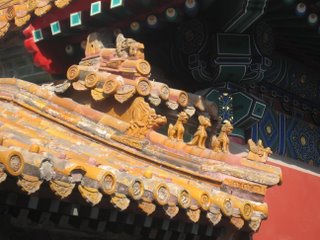 As you can see, my folks have landed, been here a few days and they have been very action packed. The kids are very, very excited to have them here and show them things.

It’s all pretty amazing. It was just about exactly a year ago that he was diagnosed with bladder cancer and the fear and loathing set in. At that point, having him here kicking around the Wall and the Forbidden City seemed like an impossible dream and here we are, with him looking good as ever to boot. That’s worth stopping to salute.

They overlapped just one night with Emily and it was actually Becky’s birthday. We went out to dinner at the Beijing grand Hotel Szechuan restaurant, which is a family favorite. Eric and Titi joined us and it was a great night,. On our way home, we circled around Tianamen Square.

Yesterday was their first day here and we went on a trip run by the school outing club to the Commune at the Great Wall. It’s a kind of a wild place. Check it out here.

It was originally designed as an architectural showpiece and supposed to become an area where people built second homes. It’s only about an hour and change from Beijing, close to the Wall and really beuatiful.. I guess that didn’t really take off, so they turned over management to a hotel company, built a couple hotel-style villas, a very high end spa and an elegant restuarant. It’s quite cool.

Suzi loved it, Dixie was interested for about 10 minutes. He really wanted to hike to the Wall, which we were told was only about a 15-minute walk, so we asked about it and signed releases then took off. About five others followed. It was a pretty steep but not too long hike up and then we were on the Wall, a pretty cool section, unreconstructed but solid. We walked around it a little and went back for a snazzy lunch.

Today, we went down to the Forbidden City in the morning, got there and in by 9 am. Believe it or not, it was the first time I entered Beiing’s number-one tourist destination. And it was really quite spectacular. It lives up to the hype, a remarkable place. We got the audio tours but really the specifics are less interesting than the totality of just being in there, and feeling the massive scale and seeing the beauty in every little nook and cranny. It’s also ironic how you read about the violence and intrigue and everything is named “Temple of Peace” or “harmony” or “Heavenly Grace.”

Those emperors had it pretty good until hey were poisoned or hung themselves to avoid the onrushing mobs. 70,000 eunuchs took care of their needs, including delivering a nightly concubine, plucked from a harem of thousands and delivered naked and wrapped in a sheet.

We walked from there over to Jingshan Park across the way. I had never been there either and it was really beautiful and good for them to see, because there were a lot of Chiense people just hanging out and relaxing.. older men and women playing mah jong, checkers and cards and, as you can see, a little dance club. You see things like this around pretty regularly in China and it always remains a mystery. But it’s nice.

We then walked out and about a little, through a hutong (alleyway lined with old courtyard houses) which had Chinese flags flying everywhere.. quite unusual which made me think a government office or official must be in there. We went over to Houhai Lake, had a nice lunch at one of the first restaurants I eve ate in Beijing, then walked around and over to the Drum Tower, another favorite spot. We took a cab over to Becky’s office, had a little tour, hung a bit and then came home with Mr. Dou to eat piles of dumplings made by Ho ayi. Today is the tart of a Holiday week. Next week is the October Holiday. The kids have no school, Many Chinese have of and the country is on the move. Many of our friends are leaving the country. Everyone says not to travel in China during these weeks but we are doing exactly that – again. It’s not so bad. Just a lot of Chinese people everywhere. We are going to the mountains of Lijiang and Shangri La in Yunnan province.

Emily was here for about five days and it was really nice to have her. Great person, great company.