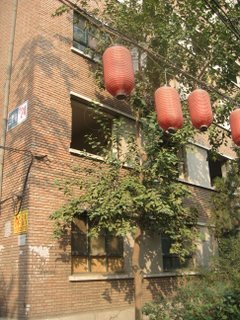 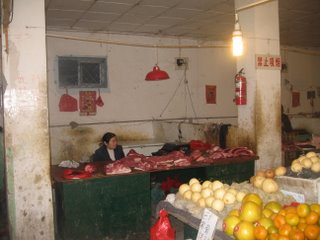 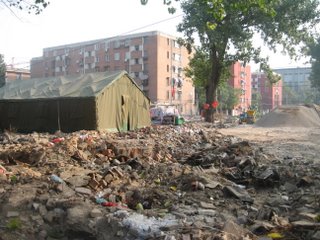 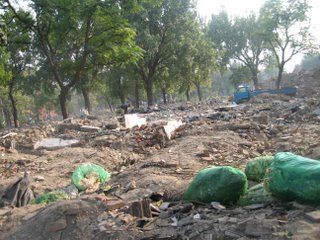 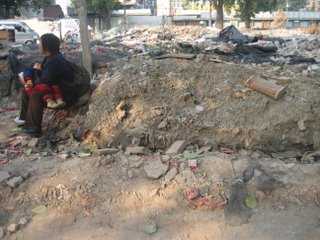 I have been thinking of writing about the way old Beijing is just being ripped down block by block and replaced by huge, glass skyscrapers, all over the central city. People hear about the hutongs (old alleyway neighborhoods) being torn down, but there are also endless blocks of old Soviet-style apartment buildings, about 10 stories high. Now, architecturally, these are no great loss, but every time they got torn down a whole bunch of people get booted.

They get some compensatory money but it’s not enough to live in town so they cfatter and all these neighborhoods vanish and people lose their little villages. It’s sad.

There is a place like this on a busy thoroughfare, which Becky goes down every day on her way to work. As the blocks get torn down , there is a fence put up around it and the entrances have slowly been getting bricked over. Yet you can still see people walking around and until recently you could still people living there. At night, there were lights illuminating it here and there. It looked spooky and somehow profound.

I’ve been wanting to go down there with Dong, my Chinese teacher, for months., to talk to people and see what’s what. I finally headed down yesterday by myself, just to check it out and see if it’s worth returning with him. Unfortunately, I was a little late. It is really largely abandoned now. There are piles of rubble with people climbing around and salvaging bricks, and a few people sitting sort of forlornly atop them. You can see all oft his in the pictures here.

Emerging on the other side, there is sort of an alleyway leading into a block of apartments that are still occupied though at the end of the block they are already abandoned. That’s what I took a picture of here — the one with the lanterns. There are still little shops and restaurants in there, and a market selling meat and fruit and veggies.. which I pictured here.. note how the meat is just sitting on the counter, no refrigeration or anything. I see that all over in markets here,. But it always looks pretty clean and even at the height of summer there aren’t flies.

Anyhow, on the sidewalk, there were some old men playing this checkers/chess game I see guys playing.. it looks complicated and they think a lot in between each move. I took some video of these guys and will get it together soon. There were a bunch of guys watching them and no one even looked at me as I stood and filmed.

I walked on through and emerged on Sanlitun Street, a pretty major thoroughfare which I didn’t somehow realize I was approaching. And then it struck me just how squeezed this little neighborhood is and how doomed it is. Sanlitun was known as bar street and they already torn down a whole block to build a giant building of some sort and that turned out to almost butt up to the alley I was walking through.