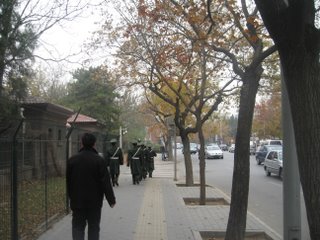 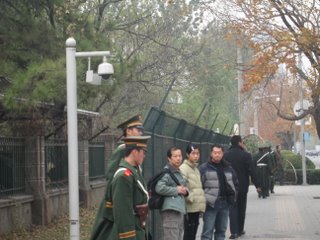 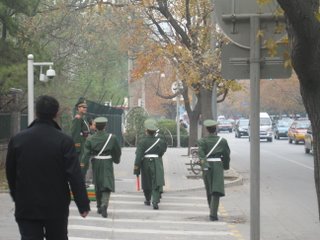 Note: these photos are not of the US Embassy but of others nearby, in the Embassy District. It gives you an idea what it looks like. These green-coated paramilitary police are all over the place.

I went to the American Embassy for the first time last week to renew my passport. They are building a new compound outside of downtown but for now it is located in the heart of the city in a large diplomatic area, which hosts many embassies. As such, it is old, leafy and filled with barricades and soldiers.

You have to walk the last bunch of blocks because cars are banned. As you approach the embassy, you have to show your Passport about three times just to get into the compound. Then you show it again inside a security building, where you go through a metal detector and check any electronics. You emerge form that and you are on American soil. Right in the front there is a little Starbucks of which I availed myself before heading inside. There signs up all over, “Holiday turkeys and hams can be picked up next Weds. in the Snack Bar.”

Entering the building you have to pass through one more security check ,showing the passport one more time, this time to a marine Sergeant behind a bulletproof glass. I can’t tell you how good I felt handing my passport over the African American kid back there. I felt like hugging him. It just feels nice and relaxed to be in that place. I didn’t even retch at the big pictures of Bush, Cheney and Rice.