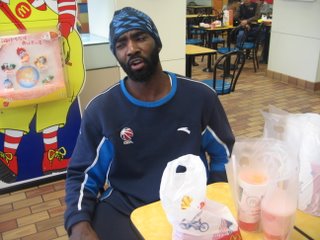 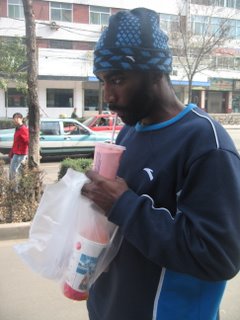 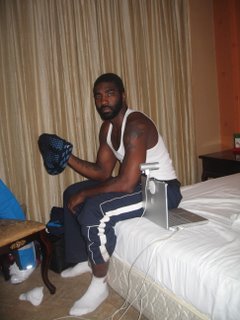 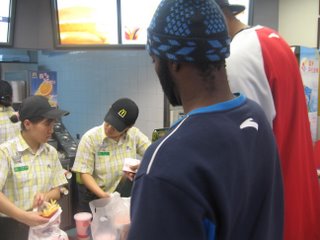 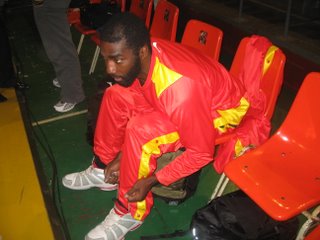 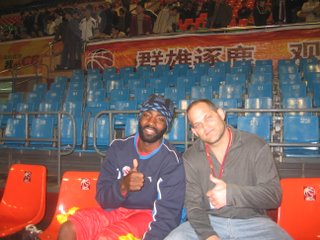 I traveled to TaiYuan, Shanxi Province the other day for a Slam story. I was catching up with God Shammgod, the great pint guard with the great name who played U-Providence for two years before entering the Draft and playing a year for the Wizards before setting off on a multi-year international hoops journey. Said journey now finds him in a place many people call the worst city in China, a dirty, dusty, polluted grey place that left me felling like I wanted to take an 8-hour shower.

It was a pretty darn depressing scene made all the more so by the fact that I really dug Shamm, found him to be honest, funny, bright, self aware, serene, trustworthy… and deserving of a better fate than playing on the worst team in the Chinese Basketball Association the worst city in China. I’m writing a feature, which will be in Slam some time this winter and then you can learn much more about all of the above.

I’ll just hit you with a little taste. Taiyuan has such a bad rep. last night, I was talking to a friend at a Halloween gathering. guy works for the World Bank and travels through China constantly. I said, “I just got back from the worst city in China.” And he said, “Let me guess– Taiyuan?”

Before I left several people told me similar things Several also mentioned “at least the food is good.” Shanxi is the noodle capital of China and I was looking forward to sampling the fare. I never did check it out, though, because I was eating with God, his fellow American teammate Rashid Byrd (a 7 foot head case from Seattle who left the team the day after I left – another story, and a good one), and Jason Dixon and Terrance Green, the American players for Guangdong, Shanxi’s opponent and China’s best team by far. And those guys want nothing to do with Chinese food. Even Jason, who has been here 8 years and speaks passable Mandarin said he avoids it as much as possible.

“They eat too much weird stuff,” he said. Now, it is true that Guangdong is the heart of Southern China, where snake and dog and other creatures you’ve never heard of are regular vittles. Jason was a cool guy and very funny. “At team meals, what saves me is we have a Muslim on the team and he won’t eat dog or snake. I watch him and if he won’t eat it, I won’t sniff it.”

I had never set foot in a McDonald’s in China and I ate there three times in 24 hours – lunch, late, postgame dinner, lunch. And the thing is, the hotel was so gross and had me so wigged out that I really didn’t have any desire to hit a local restaurant. And that’s saying a lot, lot, lot for me because I am usually Mr. Eat-the-local-stuff. The whole place discouraged exploring. I took one short walk around my hotel room, battling boldly across a crosswalk and watching some pickup hoops on a court just outside the arena and went back to my room to read, write and watch Deadwood DVDs. Sham spends all his time online, im’ing, talking on skype, downloading NBA highlights

The hotel was just so bleak. It was directly across the street from the arena and God usually lives in a nicer, 5-star joint across town (and no those God puns never get old and never run out). But they stay there game nights. It’s a little hard to really get at the heart of why the place was so nasty but I will hit some highlights, er lowlights. First of all, the weird: they don’t give you a key. Instead, each floor has a sort of ayi and she lets you in every time. A few times she was nowhere to be seen and I had to roam around yelling “ni hao, ni hao?”

Now, this part gets a little personal and scatological so skip it if you want… but I really had to use the facilities when I got there. I had to go at the airport but I held it in because.. well, anyone would have done the same if they could. Chinese toilets can be so incredibly, thoroughly, totally disgusting. I am going to write a column on this subject sooner or later and it will be nasty and it will be the most talked about one I ever write. Trust me on both counts.

Anyhow, I get to the hotel, get to the room after much nonsense and jabbering at the front desk and getting the ayi to let me in, and sit down on the toilet. I’m looking around as I sit there and I notice the following: an old, damp cigarette butt stuck to the floor and looking like it’s been there, next to the tub, for a long, long time; the paint on the door is not only peeling and cracking but just all bubbly and old and depressing. There is no shower curtain around the tub. The largest towel in the bathroom was basically a hand towel. There is a rather strong sewage smell in the room and it has nothing to do with me.

I am starting to get a keen understanding that I am not in the 5 star hotel I anticipated after talking to God on the phone. I finish my business, throwing the tp into the garbage can – another revolting aspect of Chinese toilets but one I know by now – and flush. And of course the thing overflows. And you’ll have to trust me that it had rather slight provocation. Still I wasn’t surprised.

I went out to the hallway and flagged down the ayi and said, “yo wenti, yo wenti. “ (I have a problem.”) She came down and dealt with it, telling me not to put paper in and I said, “I didn’t, I didn’t.” I flopped onto the bed in the freezing room and watched CNBC 9, the English language propaganda channel that was the only English programming available. I watched a documentary on Africa, which was pretty interesting, especially since it was all about blaming the state of the continent on European oppressors. They have a point, of course, but it was still enlightening to get the Chinese perspective on Africa. Actually, leaders of 40 African nations are coming to Beijing this week and it is a huge deal… lots of road closures, Etc. they are firmly trying to establish themselves as the go-to country for the continent. That will be interesting to watch. All the road closures etc are said to be a dry run for the 08 Olympics.

Anyhow, I hooked up with God when he got from practice, and spent the next 24 hours with him more or less. Among the highlights for me were talking endlessly about basketball, getting his opinion on Stephon Marbury, Steve Francis and many others, and watching some of his many downloaded NBA highlights, my favorite being “ankle Breakers.” We also watched highlights of Kobe’s 81-point game. I really can’t stress enough how great of a guy he is, totally unexpected by me.

He has always been a bit of a running punch line because of his name and the story that he changed it when he arrived at Providence from Shammgod Wells to God Shammgod. It’s not true; God Shammgod is his name and he changed it unofficially in high school after being teased mercilessly as a child. When he got to college, he was told he had to use his real name or legally change it, which would have cost $600, money he says he didn’t have. He stressed this to me several times and really wants it in the story. He feels that misperception has really given him a bad rep and I’d say he’s right. That’s what I remembered first about him — the guy who changed his name to God.

That evening, I rode the team bus across the street and saw Shanxi play Guangdong, which was a bloodbath from the start. Basically, you have one of the best teams in CBA history (Guangdong) against one of the worst (Shanxi). Poor Shamm didn’t have a chance, but he was awesome and the game was fun. It was actually the first CBA Game I’ve been to and it was a great atmosphere. They have all kinds of weird rules about how much Americans can play and Shamm didn’t start.. by the time he came in at the start of the second quarter they were losing 42-19.

Most of the guys in his team would barely catch your eye at a Y pickup game. Guangdong on the other hand are really good. They have 5 National Team members (to Shanxi’s one) including china’s top 2 young NBA hopefuls and they look like a real team, executing plays crisply, playign with confidence.. guys have quickness and can shoot.

I am writing a full description of the game hopefully by the end of the day and posting it on slamonline, debuting my new column up there. Will post a link as soon as it’s there.

Leave a Reply to God Shammgod and basketball in Taiyuan, China Cancel reply

Tell it to the Judge, aka Ripper! A few more pictures
Scroll to top