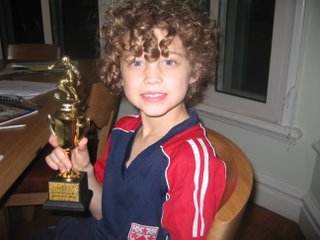 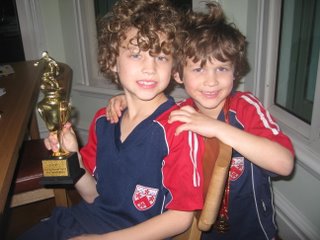 Jacob was named MVP of his Dulwich College Football Club team last week. He was really, understandably proud. He now leads his old man in MVP Awards 1-0 and has many years left to accumulate them. I was the King of Fat Lenny’s Hustle Awards.

They split the team into three and he was placed on the middle team, which honestly didn’t seem right. The coaches said they needed a couple of stronger kids to anchor it and he was happy so fine. I thought he would have benefitted from being pushed more but he ended up really enjopying being the man and the award obviously has helped him feel really good.

Eli was also proud though he is sad that he doesn’t have any trophies and jacob has a bunch — they give them out to everyone in NJ soccer and baseball. Here, you just get a medal. I may get him one at the end of the year for “Most Improved Reader.”