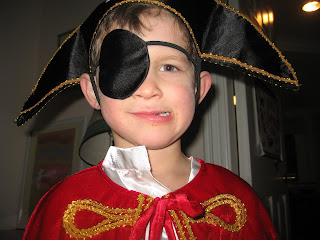 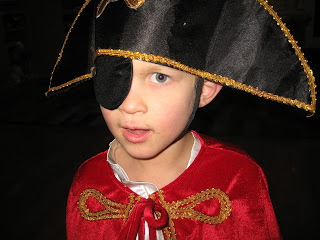 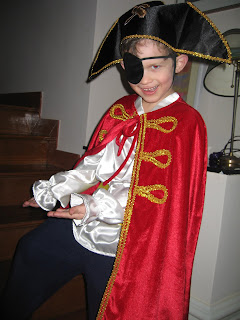 NOTE: Pictures are back. Yippee. Apparently, it was just because of the infernally slow connections we’ve had since New Year because of the Taiwan earthquake interrupting the underseas cable. We are back to almost normal speeds.

Eli wanted this pirates costume so badly.. he begged and pleaded and whined for it.. we finally gave in with a few provisos.. chief amongst them that he goes to sunday school the next day with no whining or fussing.. he actually likes it but carries on half the time like we were sending him to a chain gang.. he agreed.. we bought.

We got home, he put it on and didn’t take it off for 24 hours. the next morning when it was time to go to sunday school he refused to get dressed.. everyone in car and E in his underwear. He lost the costume and his Game boy.. got the costume back after two days, Game Boy is gone for a week. He doesn’t care, promised to go the next week.

That was actually two weeks ago and indeed he has gone last two Sundays no problem. I could go on and on with stories about Eli. He is a major character, angelic 90 percent of the time and demonic the other 10, with not much in between. He punched a kid in the face on the playground last week and what made it much worse to me is he was basically acting as a hit man – he did it, to a kindergartener a year younger than him, because another kid asked him to, “because George was annoying him.”

He told me about it that night, starting with, “I’m going to be honest with you about something…”

It can really be interesting to parent someone si similar to you. Sometimes I have to resist the urge to high five him –not over that incident, by the way. And it’s hard for someone like me to be the one forcing their kids to go to Sunday School. I could go on and on about this topic, but it’s enough for now.