Photos from ceremony presenting donations to migrant workers.. read below for the full story. 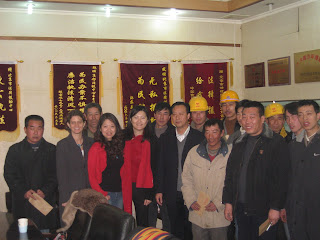 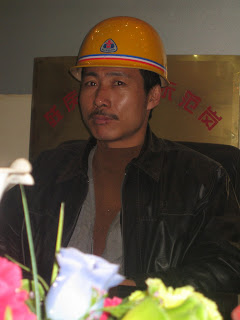 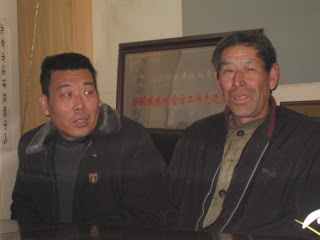 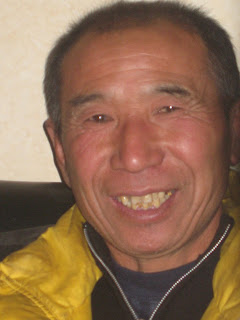 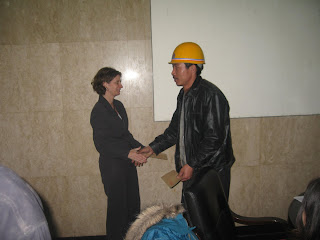 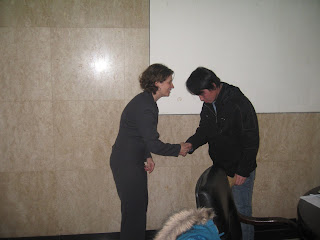 Chinese New Years day is on Sunday. Saturday night is New Year’s Eve, when people will stay up all night and light off fireworks. The holiday has really been underway unofficially for a week or two now. We are already hearing and seeing fireworks with regularity. There are temporary stand selling mounds and mounds of them on the side of the road.

The tradition for Chinese New Years is to go home, back to the village or whatever, to see your parents and extended families. A migration is under way. You see people running for buses, pulling huge suitcases and toting giant bags. There are more coach buses on the road and you can see them stacked with luggage, bursting at the seams.

The most moving thing I have seen so far by far was last week when we to the Beijing Legal Aid Society for an interesting ceremony with a group of migrant workers, mostly from the Northern Jilin Province (which is more or less next to Harbin). It’s a long story but the bottom line is the big cities here are filled with migrant workers from outer provinces who have few rights and work often in really bad conditions.

They are fairly faceless, despite there being many millions — many, many millions. The prejudice against them by Beijing people is really quite breathtaking. It’s impossible to imagine a parallel contemporary situation at home. Imagine the most racist anti-migrant comments you’ve ever heard and remember they are aimed at fellow Chinese. Anyhow, these particular guys worked on a building then didn’t get paid. Legal Aid took their case and has won but not collected any $ from the Hong Kong developer. This week supposedly the government was shutting down the completed building, now an art gallery.

Becky’s reporter Mei Fong wanted to profile a migrant worker and got Wei Zhongwen’s name from Legal Aid. The article came out a few weeks ago and it was really fantastic. Again, it gave a face and story to these faceless, anonymous workers. Several people donated somewhat over $1000 US to assist these guys. The money was given to Legal Aid to distribute and they had this ceremony to do so.

It was really moving. Wei, the spokesman, was quite eloquent. He said, in short, “Thank you very much to the Legal Aid Society for all their help and for the Wall Street Journal for giving us a voice. I know it is not a lot of money, but it means everything to us that the world knows about our lives.”

The money was particularly welcome because that night 10 of the 11 were boarding a train home. It was a special migrant worker’s train, which they have run for the past few years, leaving at 2:30 am for an 18-hour stop-everywhere train that costs 80 RMB ($10) instead of 180. I need to double-check those numbers, but I think that’s what they said.

After a ceremony and tea for everyone, the money was placed into envelopes and they asked Becky to assist in handing it out. She and the Legal Aid director each took half, the men lined up and took them, with handshakes, bows, and great thanks. Very moving.

Wei was the only worker not returning home, but he just returned from an early visit. He stayed because he now has two jobs, including one as a security guard and he gets paid extra for working next week.

Here is the top of Mei’s story.. another reason you should subscribe to the WSJ.

So Much Work,
So Little Time
As Beijing explodes in an Olympic building boom, Wei Zhongwen struggles with injuries and loneliness.
A hero in his home village
By MEI FONG
December 23, 2006; Page A1

BEIJING — About a mile from Tiananmen Square lies a pit from which a 28-story hotel will rise in a little more than a year. An army of construction workers lives and works at the open site, enduring plunging temperatures and freezing winds.

Some work the midnight hours, while the rest of the city sleeps.

Others rise at dawn. They work 15-hour days or longer, seven days a week. When they topple onto their bunk beds, it is 12 to a room. There is no heat.

One of them is Wei Zhongwen. He has more than two decades as a construction worker, and the injuries to prove it: a missing pinkie and a palm-size dent on his head under his neatly cropped hair. In the past decade, the 41-year-old has helped build skyscrapers, shopping malls and much else in Beijing and nearby provinces. He hasn’t seen his wife or daughter in two years, and because of the press of work ahead of the Beijing Summer Olympics in 2008, he may not see them this year either.

“For me, one of the biggest problems of this job is loneliness,” says Mr. Wei, puffing on a cigarette.

And on it goes.. a great story, which is right in front of all of our faces here but rarely told…