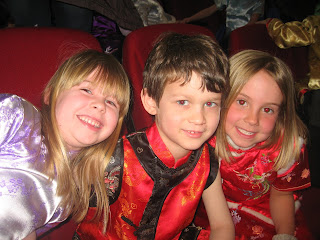 Eli at his school CNY performance. He was a flower. They were the gardeners. 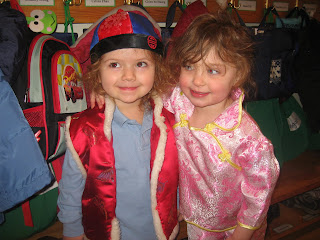 Friday was Chinese dress-up day in Anna’s school. This is her with Allegra Swanston. 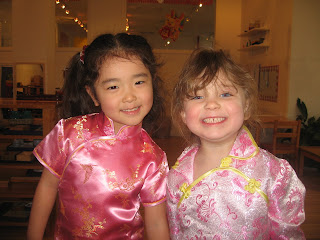 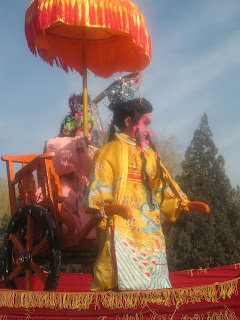 Mock emperors and empresses at the Ditan Park Temple Fair 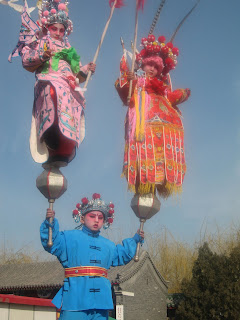 We couldn’t figure out how this worked. The kids couldn’t have been holding up the others. 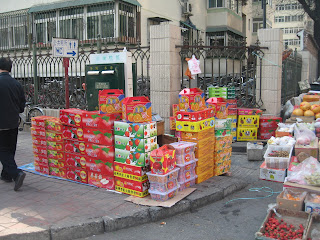 These are happy new years fruit boxes… stuff like this is for sale everywhere. 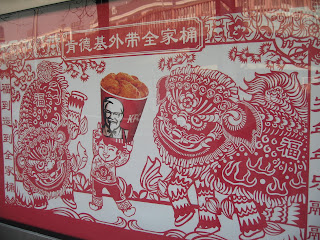 Bus stop ad in South Beijing.. even the Col. is trying to get in on CNY. 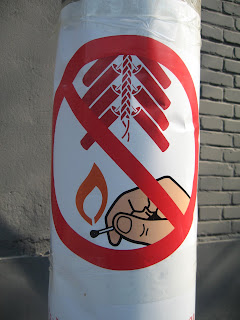 These signs were all over the hutong I visited in South Beijing.

**
A FEW months ago I did all that reporting for the WSJ Christmas-abroad story. I went around and interviewed Chinese people who celebrated the holiday and tried to get a grip on how widely it was celebrated. The answer was not all that much but a lot more than before.

But now that I have really experienced Chinese New Years for the first time (we were away last year), I can safely say that Xmas is bullshit here.. It’s just a trend that people do because they read about it or saw it on TV. Chinese New Years s the real deal. It is like Thanksgiving, Christmas, New Year’s and Fourth of July wrapped up into one holiday. It is quite wild and fascinating and truly exciting to be here for it.

Two days ago, I went with my Chinese teacher Dong to two temples, Bei Yingguan Taoist temple and a Buddhist temple. He is a practicing Buddhist and it was really interesting to visit there wit him, watch him pray, etc. He also has a good friend who is a monk at Bei Ying guan and we went into his little dorm and had a tea ceremony. It was very busy because people are starting to come to pray for a good year basically.

The Buddhist temple was down an old hutong is South Beijing and I took some of these pictures there. There were signs posted all over to not light fireworks in the hutong. They are necessary to post wherever it is illegal, because Chinese love, love, love fireworks. It’s been pretty wild all week, with them going off pretty often, and tonight it’s just nuts. It is New year’s Eve and I am writing this at about 11 pm, with everyone else asleep. The skies are exploding. I am looking out my window and watching big fireworks of all colors in the sky and hearing gunshot-like explosions from every direction.

At midnight, I am told, it just goes wild, wild, wild. We went out earlier with some friends and drove down a road nearby and let off a bunch of fireworks. We had about 10 kids there and Eli was the oldest (Jacob was with a friend). We were suitably careful. We were with three other families, all of whom receive large boxes of fireworks as New Years presents form their drivers.

While we were out there setting them off, the amount of sound, the volume of fireworks being set off from every direction was truly impressive. I was feeling too tired to stay up to midnight to see what happens, but now that I’ve made it this late, I just might ride my bike out to the street behind our compound and see what’s happening out there.

It is traditional to give presents on New Years.. two things are appropriate.. something sweet (fruit or candy) and money, in decorative red envelopes. We decided to give presents to the guards in our compound. There many, many of them so it was impossible to get them all, but we put 10 RMB into envelopes (that’s about $1.25, but not nothing to these guys) and I rode around with the kids and we gave them out, with oranges, to as many as could, before running out of envelopes. We went into the store and bought all they had left and ended up giving them to almost 20 guards, who range in age from about 19-25.

It was nice. Jacob did most of the handing out and the guards were really surprised and touched. I don’t think many people do this. It felt nice just to acknowledge these guys as people and let them know we see them. I am particularly aware of that after our experience at the legal Aid Society that I wrote about the other day. Jacob enjoyed it as well. He handed them all over and wished them all happy new year. We also gave the ‘street ayi,” the woman who basically walks around our loop and a few others cleaning all day every day, an envelope with 16 RMB (8 is a lucky number any multiple of 8 is good). She was so happy, gave us a big toothless smile and thank you.

I don’t really want to pat myself on the back too much because it adds up to not much (and was B’s idea to boot) but it did feel good.

Then we drove downtown and went to the Temple Fair in Ditan Park. It was quite stunning how empty the roads were. It made me realize how little distance there actually is from our house to the center of town.

Many temples throughout town (and all over China, I guess) have these fairs, which run all week. Today was pretty mellow, because most people are home cooking jaozi (dumplings) and preparing a big family feast. They begin in earnest tomorrow. It’s a nice park we hadn’t been to before and we enjoyed watching some performances, including the mock emperors and empresses pictured here and a dragon dance, which I videoed and will post when I can. I also learned that carnival games look just as easy but are just as hard here as they are at home. Jacob managed to win twice and gave a stuffed animal to anna. W then spent a good deal of money trying to win Eli an animal. Becky finally succeeded.

This could be my last post for a while. We are leaving Monday for 8 days, going Malaysia, Kuala Lampur and then Langkawi beach, with some friends from here. I am really happy we ended up staying for the weekend to experience this.