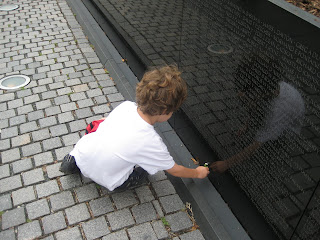 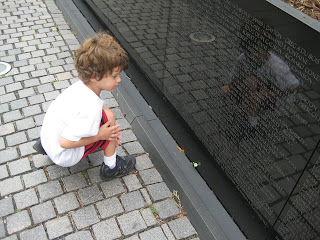 Before we entered the Vietnam Veteran’s memorial, I read the kids the riot act, explained to them what it was, said it was like visiting a church or synagogue, or graveyard and that they had to be quiet an respectful. We walked in and they behaved.

There were two ladies, mother and daughter, trying to reach up high to make an etching of someone’s name, but they couldn’t quite reach. I asked if they needed help. They thanked me and said yes. Becky, Anna, Michael and Jacob continued on, but Eli stopped with me. I stood on my tiptoes and struggled to etch the name, which the women said was a relative. Meanwhile, Eli was reading names. He understood what they represented and he became sort of awestruck at what he was seeing:

I finished, the ladies thanked me, and Eli and I continued on. He asked me if we had any relatives who died in the war. I told him no. He asked me why there were flowers and flags left along the bottom of the wall. I explained that people who knew and loved the soldiers left them in respect of their memory.

He said, “Dad, even though we didn’t really know anyone, could we leave a flower for them, too?”

I was touched, said, “Eli, that’s a really nice idea but I’m not sure where to get a flower, or if we’ll be able to come back here. We can look, though.”

We walked out. The others were waiting – Jacob and Michael had just breezed through, seemingly unmoved. I saw some wild daisy type flowers growing on the lawn and told Eli he could pick one and put it on the wall. He plucked two and I walked back with him.

“Put it down on the ground and say a prayer for one of the soldiers, or even for all of them on that section.””

“Well, you might say something like this, ‘God, please grant peace to these soldiers, who gave their lives for our country, and for their families, who miss them very much.”

“Do I say that on the inside or outside?”(He meant out loud or to himself.)

He very meticulously placed a flower into the crack of the wall, and another on th bottom and shut his yes for a few seconds. “Ok,” he said.

I gave him a big hug and we walked out.