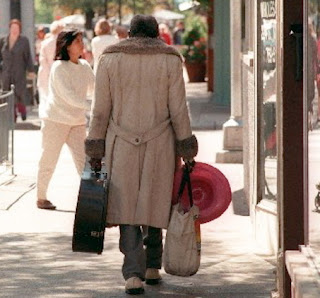 Jake was truly an Ann Arbor legend. Anyone who has spent any time there knows that. There used to be a fantastic mockumentry about him that ran n community access all the time. Somebody should dig that up and throw it on You Tube.

Go to http://blog.mlive.com/annarbornews/2007/09/shaky_jake.html, where this story was posted and read through the comments on the bottom. This was one beloved guy.

FROM THE ANN ARBOR NEWS:

Shakey Jake Woods was a star in Ann Arbor, almost from the time he arrived here 34 years ago.

Wearing his trademark three-piece suit, hat and dark sunglasses, the man known simply as “Shakey Jake” could be seen playing his guitar on the street downtown for as long as many can remember. And when he stopped inside local stores or restaurants for breakfast or lunch, it was if a movie-star had walked in.

“Customers would treat him as a celebrity,” said Kathi Macker, a manager of Expresso Royale on Main Street.

Woods, perhaps the city’s most recognizable resident, died Sunday evening, said Felicia Epps, a property manager for the Ann Arbor Housing Commission. He was 82 years old, according to a friend and the date of birth he gave police in 2001 after he reported being punched in the stomach.

Though he played his guitar with vigor, it was often out of tune. Sometimes it had only one or two strings.

But he had a larger-than-life persona.

Among his claims: That he had been around the world dozens of times but never in an airplane. That he had a dozen bodyguards who watched out for him constantly but couldn’t be seen by other people. That he slept only two hours a night. And that he was born on Halloween and was 104 years old.

What’s true is that he sold tapes, T-shirts and bumper stickers (“I brake for Jake”) that made their way around the country. Occasionally, he put a bucket out on the street when he played his guitar. But he lived on Social Security and relied on the kindness of many downtown merchants. It was enough to cover the cost of renting rooms all over the city, and later to live in public housing.

“He was so harmless,” said Chera Tramontin, whose mother, Karen Piehutkoski, opened Kilwin’s Chocolate Shoppe in 1983 on Liberty Street. Woods was one of the first to visit the new shop.

“It wasn’t that he wanted the handout,” said Tramontin. “He wanted to go out and work, and he thought he was working. He was out playing his music.”

Woods was raised with 13 younger siblings on a farm in Little Rock, Ark. The family eventually moved to Saginaw, but Woods never went to school.

Fred Reif, an accounts payable clerk at the University of Michigan who booked blues artists for shows over the years, lived in Saginaw. Woods was a street person there, but played some music.

Reif invited Woods to play at the Ann Arbor Blues Festival in 1973. He only played for five minutes, but he made an impression. After the show, Reif said, women and girls headed backstage to fawn over Woods, thinking he was a blues star.

And he never did. Instead, he became a street legend in Ann Arbor, Reif said.

Many mornings, Woods arrived at Afternoon Delight before the Liberty Street restaurant opened for the day. He ate breakfast for free – oatmeal and wheat toast.

“He used to eat clam chowder, but we talked him into oatmeal because it was better for you,” said longtime employee Kim Bewersdorf.

If a customer was seated at his favorite table by the front door, Woods asked that person to leave. And they always did.

At Kilwin’s, an autographed poster of a much younger Woods hangs on the wall. He often stopped there to collect a bucket for busking, and when he returned it later each day, he was treated to a cup of ice cream. Employees then called a cab for him to get home; a notecard providing instructions to new employees is taped up near the phone.

“The whole town cared for him,” said Carol Lopez, owner of The Peaceable Kingdom on Main Street, who managed Woods’ finances and paid his bills, among other tasks.

A memorial service is being planned, Lopez said. “He had a lot of friends,” she said.