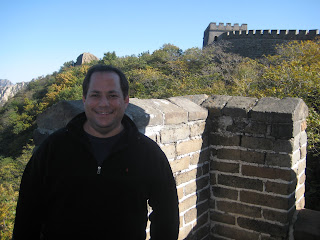 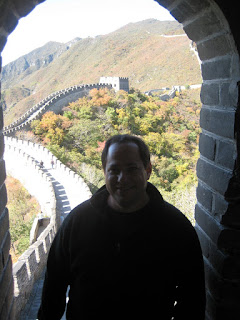 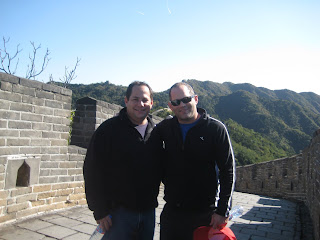 Jay Gindoff was here for about 48 hours, Thursday evening-Saturday afternoon. As always, great to see Jay. He and I visited the Mutianyu section of the Great Wall on Friday. That was my third trip there this month and probably my 20th overall. It’s getting a little stale, i admit, but I always enjoy getting on the wall, it’s a beautiful stretch and I know the way there, no problem. I never thought the Great Wall could become old hat, so I even enjoy that, actually.

It was a gorgeous day, crisp and clear. The weather has been like that every day for a few weeks, sunny but cool most afternoons, chilly in the morning and evening — perfect fall weather.

The politburo is meeting now to elect themselves or something. They meet every year, have ‘elections” every five, and this is one. There were police stationed all along the top of the Wall, presumably because someone important was visiting… towards the ends they were paired up but in the middle sections they were alone and as disinterested as you can imagine. One was sending texts, another sitting with his head on his knees sleeping away. It was a little extra scenery. Very few other people up there on a Friday afternoon.

Yesterday afternoon, we returned to the same area and visited the Red Snail temple, a beautiful old Buddhist temple with surrounding pagodas, etc built into the hills. Unfortunately, my camera battery was dead so it shall have to love only in your imaginations for now. We’ll be back. There was a plaque on the temple itself that said, “Destroyed in 1972. Rebuilt in 1992.”