This was a field 10 days before. 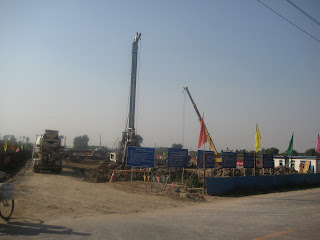 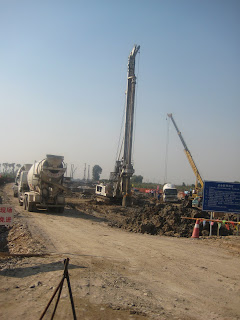 …the more they change. The pace of change here is just breathtaking and continues to be. There was a lot of talk that there wasn’t going to be any new construction this year, that things were moving so incredibly quickly because china had promised to have all construction done a year prior to the Olympics, in part to allow the dust to settle.. it is apparently a sizable part of the pollution problem.

But that is bullshit. Stuff is still being torn down and put up at amazing clip.

The new airport here is going to be pretty amazing.

I am going to write my column this week on this topic so I’m not going to get too deeply into this right now, but it’s really astounding how much change we’ve seen here in just a few years. In that regard it’s as if we’ve lived here for a decade or more. And once a project starts, the resources and manpower thrown at it are absolutely astounding.

There is a back way out from our house heading north that bypasses a long stretch of the horrid Jing Shun Lu. I have taken it often over the years. You zigzag through a couple of country-ish lanes. The first one runs partly through some fields and partly through Qan Fa, a housing compound across the street from us.

But after you get on the second road, it has or had, a nice bucolic country feeling. You go by a couple of small shops on the corner, including a motorcycle repair place and then by a bunch of fields on the left. Light industrial type buildings were on the right across a canal. Moving further down the road, there were several man-made fishing holes, where you can go and, I suppose, pay a fee, to rent a rod and catch some carp. I’ve always wanted to give it a go, actually. Continuing on, you pass some more fields. The last plot before you get back to another larger road is a lily pad field/pond in the summer.

In the fall, this road fills up with corn being dried, a sight I’ve always enjoyed checking out. About a month ago, someone told me there was construction going on out there so I hopped on my bike and rode out to check it out. I couldn’t believe what I found: a farm field close to our side of this road had been supplanted by a huge construction site, filled with earth movers, cranes, huge drilling apparatus and dozens of men.

It was clearly a highway construction and I figured that they were connecting the Jing Cheng Expressway which runs North from the city to the Airport Expressway which angles Northeast. They are several miles apart, with a village, small businesses, light industry and farmland in between. Or they were.

That was a few weeks ago and I have watched the project grow since then,. I’ve been on the Jing cheng a few times since then and you drive right along the growing, elevated highway. On either side of the road running parallel, land has been eminent domained and small shops bulldozed.

Last week I went out the other way, along Jing shun and then out towards the Airport Expressway, taking the back road to school, and the same thing is happening on that side of the connection. Soon they will have to commence building a huge flyway across Jing shun Lu, which will really alter the feel fo this are… not that it hasn’t already been totally changed since we arrived.

Now the construction site I originally saw has grown and there are pylons ready to carry an elevated highway, and the light industrial factories on the other side of the road are piles of bricks, which are being removed by donkey cart, to be reused elsewhere.

Meanwhile, Jingshun Lu itself is changing at a breakneck pace, mostly for the better. It seem that someone has decided to beautify it. As I’ve described before, it is a dusty, dingy road,.. or was. There are many trees, bushes and flowers being planted now and dirt brought in to for berms. A bunch of small businesses at a lower end, close to us, are now obscured behind a very nice decorative wall, with flora in front of them. You have to know they’re there to notice them at all.

Further up the road some busineses are reduced to rubble, others have also been shielded from view by a nice decorative wall. And still further up, some formerly dusty areas are now full-blown, quite lovely looking parks. The change is so rapid that a section can literally look transformed from morning to evening.

Why all the action on Jing shun Lu? I drove by all this yesterday with Ding ayi in the car and I asked her in Chinese. “Yinwei (because),” she replied, “next year, Olympics come.”

This is typical of the Chinglish we speak to each other, and also a revealing answer that is probably largely if not totally true. They don’t want anybody coming for the Olympics to see anything unkempt and so everything anywhere that people may logically pass is being torn down, upgraded or hidden behind a wall or a row of bushes and trees. Is this progress? You decide.

I think the Jing shun Lu improvements also have to with the absolutely massive new convention center being built up he road. When that opens, thousands of people will be traveling up this formerly provincial road into what used to be the boondocks –w ay back when I moved here two and half years ago.

And it’s not just the convention center. That construction also bred a massive two-building hotel, which is rising from the dirt catty corner from the convention site, And then there’s the new EuroPlaza being built across the street. It is going to be some sort of mall. I don’t know much more, but the rumor mill is churning up talk of Mcdonald’s, megaplex movies and more. Some people think this is great and others are horrified. After all, it is dwarving the nearby Pinnacle Plaza and making it seem obsolete and sort of sad. And people have a soft place in their heart for the Plaza. It was there when they got here, after all, which means its been there forever (it’s about four years old).