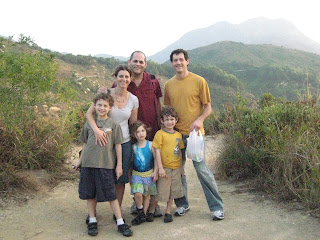 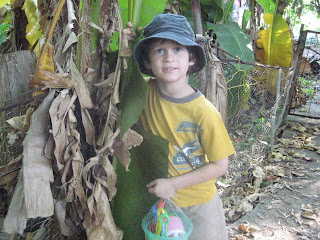 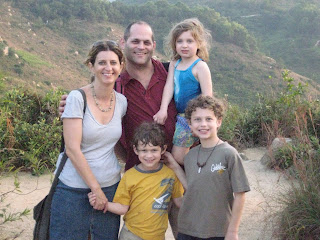 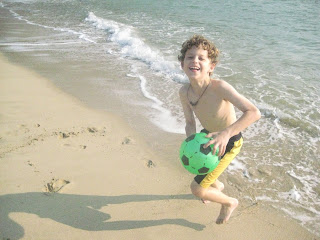 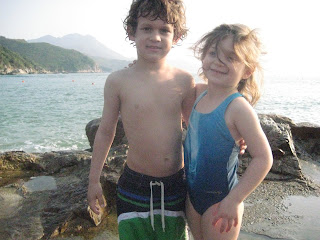 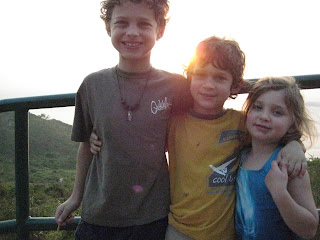 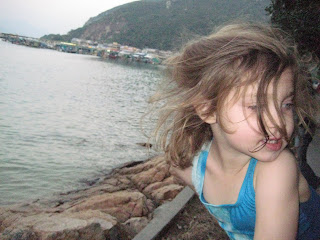 We spent an afternoon/evening on Lama Island when we were in Hong Kong. It is a 30-40 minute boat ride out into the South China Sea and really a very cool place. You arrive in a pretty densely packed little commercial center, walk about 15 minutes up and down some hills, past little farm plots, bannaa trees, papaya trees, stray dogs and cats roaming around, and land on a really nice beach.

We played there for a couple of hours and you can see it looks like you’re in the tropics (as long as you can’t get to a spot where you can see the giant cement plant around the bend.)

Then we pushed on, walking about 45 minutes to the other end of the island,. In between ,it is hilly and really beautiful. We were with Ken Brown, WSJ friend in from NYC.

The population of the island is about 10,000 and apparently there about 3,000 expats there. That’s sort of amazing Hong Kong overall seems like such a cushier, less exotic expat experience than Beijing, but this seemed so much wilder than our lives.

I spoke with an Irish guy on the beach and he said rent is about a third of what it is in Hong Kong and people not making huge bucks usually end up pushed to the fringes of HK, with long commutes anyhow, so many opt to go out there after a few years. I asked what happens if you want to go out on the town and he said there are ferries until 12:30 and then for $150 HK (about $20), you can hire tuktuk. I asked what that was and he said, “A 90-year-old woman with a little fishing skiff.”

It was a fairly significant ride in which we passed some massive freighters and fishing boats. A 1 am tuktuk sounds pretty scary scary to me, but it was a cool spot. I’d like to write a column about livng there was an expat one of these weeks.

At the other end of the island there is another little village. Fish farms fill the bay and fish restaurants fill the dock. I didn’t expect much but we had an excellent dinner. All of it was fresh seafood, we picked live incuding a big old squid that came to the table about three minutes later as probably the best fried calamari I’ve ever had. It was tender—you never get fresh squid –, not too greasy or breaded and breaded with salt and pepper so it didn’t need any sauce. We also had excellent black bean clams, fresh, non stringy steamed shrimp, delicious fried rice and a few other dishes.

Sadly, we had to pull ut before uur steamed red snapper arrived. Ken stayed since the 45 minutes wait for the next ferry didn’t matter to his kidless self and admitted the fish was spectacular, but I knew it would be. It was a truly memorable meal, extra amazing since we had superb dim sum for lunch.