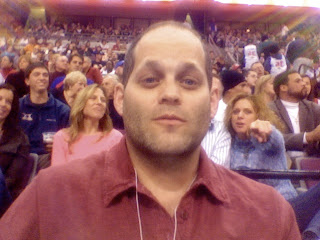 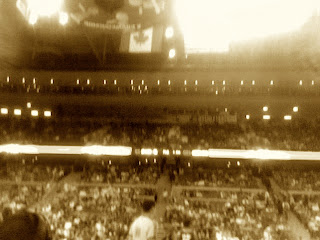 I don’t have a working camera at the moment, but I used PhotoBooth to snap this shot of me at the scorer’s table and the action in front of me. I should have been bolder in turning around the computer and snapping. I missed some great shots.

There are not too many things I miss living in china (people are a different story). Near the top of my former routines that some times long for are Allman Brothers at the Beacon Theater every March and courtside seats, pen or laptop in hand, at NBA Games. I’m not crazy enough to fly back for the Beacon but I do get to squeeze in a few NBA games every year on my winter visits. Last night I made it to the Palace of Auburn Hills for the pacers/Pistons game, my only opportunity this year.

I was living in Ann Arbor in 1996 when I started writing for Slam and so the vast majority of the first NBA games I attended as a member of the press were at the Palace and it feels a bit like going home. I was there plenty early and chatted with a bunch of people, including Clark Kellogg, who broadcasts the Pacers games. I did a feature on him as a player last year and he gave me bi thanks for helping him with his kids.

“My son saw that from a friend at school before I even had it at home,” he said. “He was really impressed to see the old man in Slam.” The guy is on TV talking hoops nationwide most nights of the week, but his son only perked up when he saw him in Slam. Word!

For an upcoming story I am doing on Dr. J I also chatted with Pistons assistant coaches (and former NBA All Stars) Dave Cowens and Terry Porter. But the highlight may have been meeting Rasheed Wallace’s mother. I spoke to her on the phone for a story I did on him years ago. Sheed is a bit of a headcase and was much more of one at the time. He was hard to talk to but I somehow tracked down Mrs. Wallace at her home in Philly. She is an RN who worked ina Philly hospital for years and was as straight shooting as her son was not. I need to find the story, but she said something like, “I don’t know what’s wrong with that boy” and was really a pleasure.

I reminded her of that last night and she remembered the whole thing. She looks a hell of a lot like him and stands at least 6-1 (Sheed is 6-11). When I mentioned that, she said, “I look a lot better than him, though, right?”