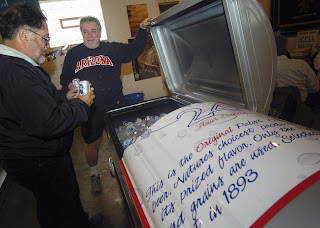 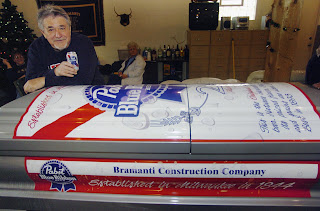 Cousin Danny Cohen spotted this story on the AP wires and remembered Fat Al’s love for PBR. I love everything about this story but the way Bill Bramanti’s daughter refers to him as “Bill Bramanti” is the best.

“I actually fit, because I got in here,” said Bramanti of South Chicago Heights.

The 67-year-old Glenwood village administrator doesn’t plan on needing it anytime soon, though. He threw a party Saturday for friends and filled his silver coffin — designed in Pabst’s colors of red, white and blue — with ice and his favorite brew.

“Why put such a great novelty piece up on a shelf in storage when you could use it only the way Bill Bramanti would use it?” said Bramanti’s daughter, Cathy Bramanti, 42.

Back from Japan More Japan photos
Scroll to top