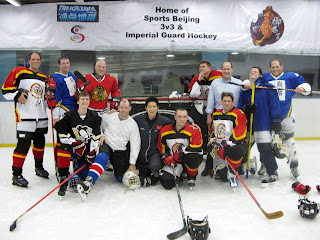 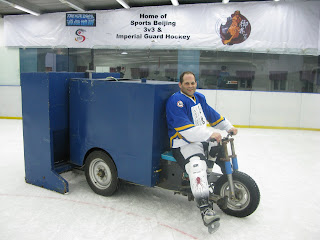 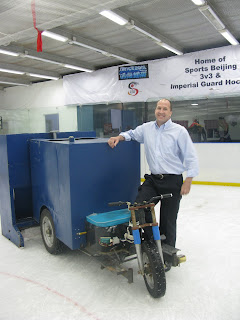 One Couple’s Passion for Hockey
Draws Beijing Expats onto the Ice
June 3, 2008

Remarkably, becoming a half-baked Chinese rock star is not the most absurd thing I’ve done in Beijing. The most absurd thing I’ve done is becoming a half-baked hockey player. Dreams of rock stardom have long fluttered around my brain. Hockey, on the other hand, was never a part of my life and I didn’t have any reason to think it ever would be. It’s not generally a sport someone who can’t skate decides to take up at age 41.

Then my friends Vicki Lowes and Shawn Sparling opened the Ice Zone last fall, and I became one of many people around our expat-heavy Beijing neighborhood to get unexpectedly sucked into hockey and ice skating. The rink, which is half-sized and housed on a former tennis court on the second floor of a clubhouse compound, now has 500-600 paying visitors a week, both expats and Chinese. They are taking lessons, free skating, playing hockey and learning to figure skate. Many of them, like me, would probably never have laced up skates if the Ice Zone had not opened.

My hockey playing, and that of most of my fellow players, is an example of how expat living frees people up to try new things. But it also illustrates how in an expat community, a few people can have a huge impact, in this case creating a small army of hockey nuts of all ages and both genders, as well as a growing number of young figure skaters.

The Ice Zone has inspired expats, including Alan Paul (far right) to lace up skates at least once a week. The team’s coach, Shan (center, navy track suit) hails from China’s northeast, where skating has a long tradition.

Shawn and Vicki weren’t looking to launch a business when they started plotting the Ice Zone. They were mostly trying to save themselves countless hours and miles ferrying themselves and their kids around town to skate. The Canadian couple found themselves driving across Beijing to play hockey six days a week — twice for Shawn and twice each for their sons Connor, now 11, and Matthew, eight.

“We spent a lot of time driving and then standing around rinks with other people from our community saying, ‘Wouldn’t it be nice if there were something closer to home?'” recalls Vicki.

After partnering with another set of local hockey parents — Philip Ho, a Chinese Canadian, and his wife Angela, who is local Chinese — they spent two years searching for a proper site. They finally found it in the clubhouse of their own compound. Having a Chinese partner helped ease the way in having the company registered and the rink built.

“It was never our intent to make a penny off of it,” says Vicki. “We thought it would be good for our kids and for the community.”

The Ice Zone is now definitely a business, covering its own costs. It was funded by the four partners and they hope to recoup their initial investment in three to five years. A public spirit still infuses the rink; it feels like a clubhouse or community center. I can’t imagine having taken up hockey anywhere else, and it’s likewise impossible for me to imagine feeling quite so comfortable at another ice rink.

“Nothing about the place says ‘business,'” says Chris Keogh, an American banker who is part of our regular weekly hockey crew. “It feels like a giant backyard skating rink.”

Shawn laughed when I mentioned this to him — because he did, in fact, make backyard skating rinks every year before moving two years ago into their current house. It does not have the proper space, but now all of us skate on his private rink.

The Ice Zone launched Monday night beginner’s hockey and learn-to-skate shortly after opening in October. We began with about a dozen guys who couldn’t really play at all. Many of us, myself included, could barely skate. We quickly began to be joined by others with a bit more experience. Mr. Keogh, who played intramural hockey at the University of Michigan and hadn’t hit the ice in the ensuing 15 years, is fairly typical.

These returnees to the game, most of whom were thrilled to be able to play again, helped us improve, as has the persistent but gentle work of our Chinese coach Shan. As more and more people signed up, a Thursday night session was added.

The Ice Zone also launched a women’s program, quickly dubbed the Hockey Honeys, in large part because after years of watching her husband and sons play the sport, Vicki wanted her own time on the ice. There are now 16 women, including many friends, but not my wife.

“I have loved this since the moment I stepped the ice,” says Kate Kirkwood, an American friend who was one of the first women enrolled. “I watched my son play for four years but I never would have tried it myself if this rink hadn’t opened.”

My sons both did two sessions of beginning skating. There are also private lessons, several serious young figure skaters training and a weekly three-on-three night for real hockey players, most of them Finnish or Canadian. Last Sunday, 23 kids ranging in age from five to 12 performed Stars on Ice, an hour-long show set to popular music that was the culmination of a 12-week training program.

There are three full-size rinks and four or five other small ones in Beijing. As Chinese incomes have risen, more rinks have been built, and the sport has slowly gained in popularity, but it is only truly mainstream in and around Heilongjiang province in northeast China, near the cities of Harbin and Qiqihar. Most of China’s best skaters come from there, including our own coach Shan.

In addition to founding the Ice Zone, Vicki is one of the main forces behind Sports Beijing, which runs a wide range of youth sports programs, including soccer, baseball, track, rugby and cricket. Thousands of expat kids and quite a few Chinese participate. Many friendships are forged around kids’ sports. Now the mothers and fathers are bonding over hockey.

By any objective standard, I’m still a pretty poor hockey player, but I have improved by leaps and bounds since those first tentative, shaky-ankle outings last fall. As have all my comrades. And as time went by and our skills improved, a sea change occurred; we actually began to think of ourselves as hockey players.

As Chris Keogh notes, “We all signed up on this thing because it was called ‘Learn To Skate’ so we weren’t intimidated. Then some time in the spring, we saw that on the bulletin board and felt insulted.”

Nothing symbolizes the rink’s do-it-yourself spirit more than the homemade Zamboni created by Shawn. A Zamboni is a rideable machine that resurfaces the ice on a skating rink, smoothing out the grooves made by skaters. It is an essential piece of equipment, but procuring one for the Ice Zone offered two major challenges: a full-sized machine wouldn’t fit in the confined space, and it would be prohibitively expensive – as much as $70,000, according to Shawn.

So he set out to build his own machine. At its core is a three-wheeled mini tractor built to haul bricks around a small factory. He drew up plans and crafted the rest in his garage — “I’m an engineer by training,” he says with a shrug — had parts fabricated by local welders and put it all together himself. The result is a crafty little machine that never fails to make me smile.

“You’d find stuff easier in Canada, obviously, but we probably never would have opened a rink there,” says Vicki. “Building that machine was all part of the China experience for us.”

Unfortunately for all of us in our little expat world, Vicki and Shawn’s China experience is coming to an end; they are moving to Kuala Lumpur, Malaysia, this month after six years here. The Ice Zone, they assure, will continue, with their partners Philip and Angela running the show and the rink’s local Chinese staff now operating smoothly. Still, it’s hard for me to imagine it being quite the same because Vicki and Shawn’s spirit so infuses the place.

Kuala Lumpur only has one small rink and I’m certain that Shawn is plotting hard and studying the availability of three-wheeled brick haulers.

“It is in the back of my mind,” he admits. “But Vicki would probably kill me.”