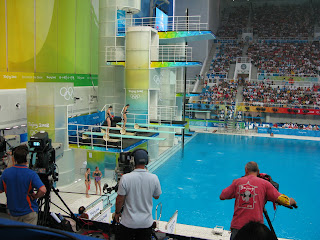 2:18 pm I thought I would try something different here and do a little live blogging. I need to take notes anyhow.

I am at first Diving competition of the Games, Women’s 3M synchro springboard. I have a prime spot in the press “tribune” First row of many rows of press seating, directly up from the boards.

First observation: 3m is not very high. I guess I am more used to watching the platform diving. Those platforms are looming above the springboards, which basically look like a regular high diving board. I just watched the divers do their warmups and it is cool. I am excited.
Chinese divers Guo Jingjing and Wu Minxia are huge favorites. If they don’t win, it will be a major upset. And China will be majorly upset. Guo is a superstar here, one of the most popular athletes. She’s also very cute, as Woodie accurately pointed out to me this morning.

The press sheet says “the current Olympic and world champion pair look unbeatable in this event.” This is the first of two golds Guo hopes to win.

This is my first visit to the Water Cube and it is as spectacular as advertised, as cool looking inside as it is out, one outside wall and the roof a series of large translucent bubbles, that look like giant cellophane planes.

About 10 minutes before the event starts, the divers come out, line up and are introduced. The first sight of Guo and Wu elicits cheers and their introduction brings an ovation. They dive second, and are greeted by a huge roar, followed by pure silence as they prepare to dive, then dive, followed by another roar as they seamlessly complete their first simple back dive. Everyone else feels almost like an afterthought, most of the crowd clearly just waiting to see Guo and Wu dive again.

Though there is a small band of vocal Brits behind me cheering loudly for the British diving team , who don’t look all that impressive to my rather untrained eye. ..ah, the scores show I’m right.. lowest by far so far.

Germans are next and there are some of their countrymen here.. pretty big ovation. They look pretty eh , too. Looking forward to some tougher dives.

At the end of the first round, Guo and Wu are tied for first with Russia and the U.S.. The scores lead to another cheer, as China is shown atop the standings.

Each round, the anticipation grows and the applause for Guo and Wu grows. One of the deep realizations I made years ago when I started interviewing all the great retired basketball players was just ho important mental fortitude, determination and intensity are, how big of a component of athletic greatness. This is a good example, in a sense. Guo and Wu seem to be reveling in the attention, waving to the crowd slightly, bowing as they come out of the water after each dive. It would be pretty easy to freak out.

A really huge applause greets the revised scoreboard after the second round when it shows that gu and Wu have pulled far ahead after a three-way tie through one dive.

The entry on their third dive looked a little sloppy to e live, though the replay looks pretty damn good.. and the score shows… I was right at first.. lower scores than last time.

But after each round their lead grows, the anticipation towards victory rises and the cheering when the revised standing gets louder. After four of 5 rounds, they are leading the Russian pair by 17 points and only some sort of disaster stops this from being a fight for silver.

When they nail their final and most difficult dive, there is more cheering, repeated with each replay. The disaster did not come, and now it’s just a matter of letting the last six divers complete their work so Guo and Wu can collect their gold.