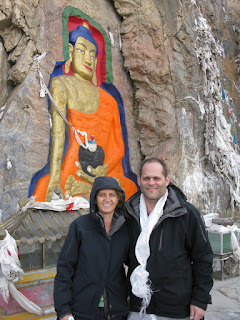 We are in Lhasa, chilling now at the Himalaya Hotel. Lo and behold, they have internet access pathetically, the first thing I did was check if the Steelers won and read up n the game. It is an illness.

We basically just pulled in from the airport and came here, meandering through town a bit. I’ve heard a lot of people say that Lhasa has become “just another Chinese town” but that is rubbish. First of all the geography of the region is too breathtaking, stunning and just plain odd. I doesn’t look like anywhere else.

Coming in from the air you start passing over large brown mountains, just a few of which are really high and snow-capped – as cool and impressive as they are they are nothing like the big glorious beauties we saw in Western Sichuan on that crazy trip. Descending, I was struck by how dry it was; everything brown. I saw lots o glacial valleys. We had a really bumpy descent, being thrown all over the place until we came through the air pocket.

The drive no town – about 75 km —is quite stunning, crossing over two rivers, one of which is clearly a big alluvial plain and swamp n the spring. We passed through a mile-plus tunnel – which is two years old and supposedly the first tunnel in Tibet and stopped at a giant carved Buddha, which is 900 years old. (See photo)

Nearing town, you come around bend and suddenly the Potala Palace is visible, It is the palace of the Dalai Lama and before that the Tibetan kings. It is huge and sits a top a hill in the center of the city. For centuries it was the tallest building in the world and, as I said, you can see it for miles.

Up close its scale is stunning; it is just huge, huge, huge. We are going in to visit tomorrow morning.

I would like nothing more than to say I was unaffected b y the elevation – Lhasa is 3,700 meters, which I guess is about 11,000 feet . I figured after all those hikes up to Snowmass’ Hanging Valley Wall at a similar elevation I’d be fine but I definitely feel a little lihgt headed and headachey and just generally buzzy. Not too bad at all, just weird. And that is with taking Diaxomol in a small dose since yesterday. I had a coke at dinner and really felt better. Caffeine is always my friend.

They have an Oxygen machine in the room but I won’t be needing that. Hope to be off the meds by the end of the day tomorrow.. in the meantime just taking it easy and drinking lots of green tea and water.

Very happy to be here, even for a too-brief visit