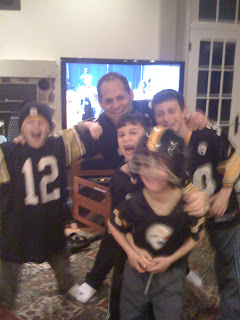 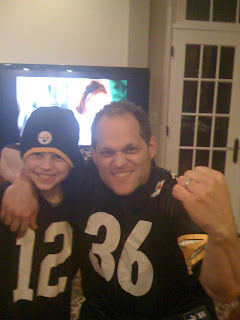 Jacob was fully into it. 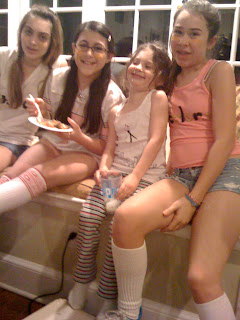 Cheerleaders were ready to roll. 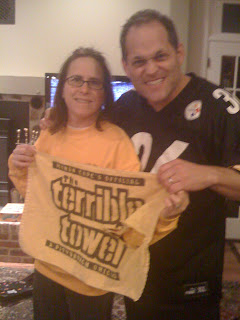 Laura was wearing a black and gold
Paul Lumber sweatshirt. I was jealous.
Gracious hostess, even if she did check
Facebook mid game. 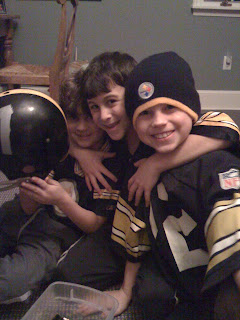 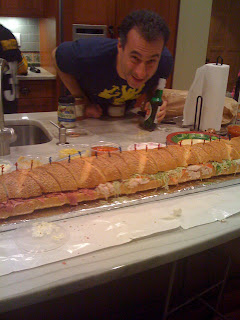 Jon was vaguely rooting for the Cards,
but he came through in the kitchen and
even with a few timely high fives. 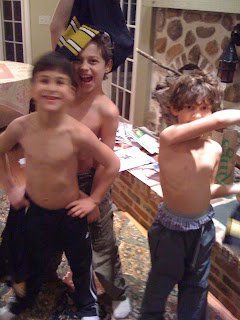 Victory prompted some real Lord of the
Flies wilding…complete with shirts being
whipped off and flung around. 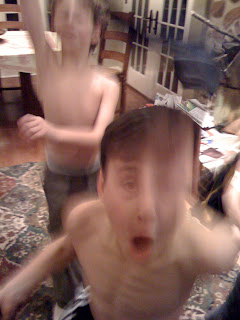 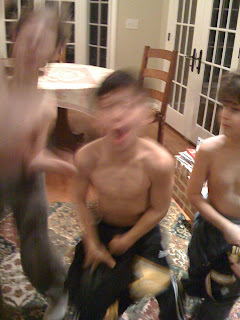 Well, that Super Bowl victory was a great welcome home present. So thank you coach Tomlin, Mr. Roethlisberger, Senor Santonio and all the rest. I have a space on the mantel reserved for the photo of Tomlin and Obama shaking hands. It will go right next to the portrait of Willie Mays, Roberto Clemente and Hammering Hank.

It is really hard to explain to someone who doesn’t know why I/we care so much about the Steelers. I guess explaining any fandom is difficult. It is irrational and rather bizarre when you really think about it.. Of course it is not unique to the Steelers or football or America. I have lots of British, Aussie and other friends in Beijing who were awake at all hours of the night to watch soccer rugby and cricket matches and who root for their teams with just as much passion as anyone.

But it sure feels like the Steelers connect with more people in a deeper way than most teams. Is this just an illusion from inside the bubble? Perhaps but I don’t think so.

Steven Dubner in Freakonomics wrote a nice post yesterday about 10 Reasons to Like the Steelers. I would agree with all of them.. and the photo of his son at Heinz Field surely makes me want to get my guys there next year.

Our great friends Danny and Shani moved to Pittsburgh several years ago when he started working at Pitt after more than a decade in Ann Arbor. He was astounded by the intensity of the Steelers fervor and passion and how deep it runs. “They think they love football in Ann Arbor,” he told me. “But they don’t understand.”

And he is right. He told me about the day Cowher resigned two years ago. Everyone was walking around in a daze and a stranger approached him in a store. “What are we gonna do?” he wondered. Needless worry, as it turned out.

Last night, after the game, Danny sent me this message:

The ride home after the game amazing. Kids and grownups outside their houses wearing their gear, waving the towel, and all the cars honking and screaming. Eva loved it. She was hanging outside the window of the van screaming her head off.

I remember nights like that when I was a kid and I know that his girls will never forget it. They will have the fever forever… even when they end up in Israel, China or Nepal in 20 years. Especially then! They will find like-minded lunatics and gather together in the middle of the night to watch a game. I know this for a fact.

My Michigan loyalty could never be as deep because of what seeped in during my childhood. Danny’s girls are growing up during phase two of Steelers mania.. I grew up in phase one…

As you can see from these photos, I watched the game at my sister’s house and it was great fun. Nice to see our kids all wrapped up in it. I sometimes feel bad about not having them bond with local teams and worry about the lack of bonding that can come with that….For many years talking about sports has been an important part of my relationship with my brother and father… and for some years it probably was important to keep channels open. And I eel in one way like my kids should have the same kind of bond to their local teams here…but I can’t share that. And it can’t be the same anyhow.

On the other hand, I am glad that they share my love of the Steelers. They are members of Steelers Nation and it’s a pretty great club to be in.

Yesterday Jacob and I wore Steelers jerseys all day I had on a Bettis and he had my old school Bradshaw. I was vaguely embarrassed to go out like this truthfully but Jacob was so into it. We went out to lunch and as we were sitting there eating pizza he kind of thumped his chest and said to me, “Wear it with pride, dad.”