March Madness is here and I am enjoying it, in a maddening sort of way.

It is the one month where I also felt most homesick in China, as college basketball reached its always fun, always nutty peak, and the Allman Brothers set up shop at the Beacon Theatre for extended runs. These are some of my favorite events of the year.

This year I have been right in the middle of both. Last Saturday night, I attended the Big East finals, liveblogging the game for WSJ.com

That was fun and it’s a promising new outlet, as WSJ now has a sports page four times a week.

I have also jumped back into a very old outlet, Guitar World. I really thought I was through with the mag, after 18 years (!). But shortly after I got back they called and asked if I wanted to do a feature on Derek Trucks, of the Allman Brothers, about his new solo album. I didn’t see any reason to say no to writing about my favorite guitarist and that led to some more assignments and now a very ambitious Allmans story, which is very much a work in progress.

So last Thursday I headed up to the Beacon to catch a show and meet with a bunch of people to try and hammer out some details. I spent two days talking to various managers trying to set things up and it became a true business trip. So much so that I forgot to get excited. But then I was riding the 1 train uptown and I started feeling an adrenaline surge and when I started walking up the steps at the 72nd Street exit, my heart was racing.

I slipped in the back door and did my business and got to see a lot of the show, which included guest appearances by two members of Phish and Buddy Guy, the Chicago blues guitarist who has always been one of my favorites.

I will be back Thursday 3/19 for another special guest. As much as I felt ready to move on, I really do enjoy having some skin in this game. It’s part of who I am at this point. 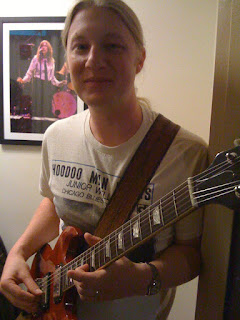 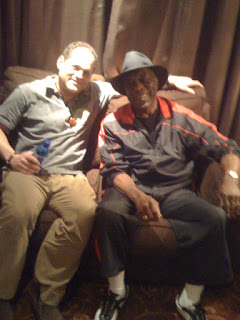 Me and Buddy Guy backstage…Seeing him
in approx. 1985 changed my life and fueled
my love of blues and live music. 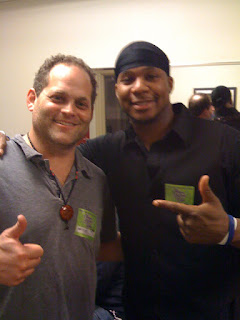