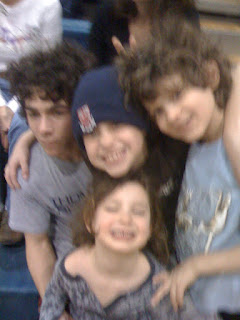 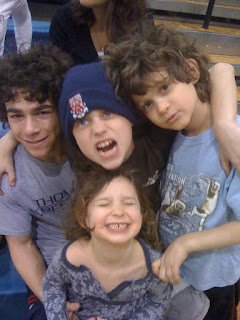 We went down to Delaware a week or two ago to see Emma as Annie Oakley in Annie Get Your Gun – or half of Annie Oakley,anyhow. In the first half of the play Annie was a tall statuesque African American girl. There was an intermission and Annie morphed into a lovely short poised Jewish girl, my nephew Emma. She did great and sang like an angel. I tried to take pictures but the Iphone does have its limitations. One of these days I will charge up the battery on my camera

The next day Jesse was in a big wrestling meet. Strange sport, man, I have three nephews on my side and they all do it. The homoerotic overtones are too much for me and I don’t like all the weighing in and 24/7 knowledge of your precise weight. It’ all creepy. But it is pretty cool to watch. Jesse’s good, too. Unfortunately, we saw him wrestle against the top-ranked kid in the country in his weight class. He was mercied in the second round, but did not get pinned. I thought he did well. The f’in kid he was wrestling had a full back tattoo, some kind of huge graphic with gothic letters across the top.

My kids have a great relationship with Jesse, deepened greatly by the six weeks or so he spent with us in Beijing. I met a few of his friends who were excited to meet “alanpaulinchina.” that was funny. If you’re reading this, a big shoutout to my homies at Wilmington Friends.

Ok, thanks Read this
Scroll to top