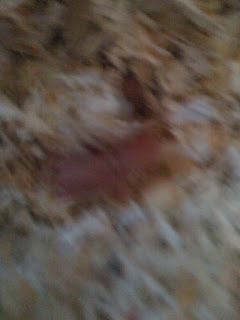 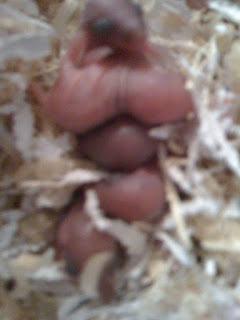 Last Sunday morning, we were giving the kids breakfast and prepping them for their first day of Sunday School. Suddenly, Jacob asked who put M&M’s in the gerbil cage. I came over to see what he was talking about — and saw that our gerbil Bob, ahem, in our house all of a week, had given birth to about five babies. They were underneath her, bright, bright read and indeed about the size and shape of peanut M&Ms. Anna later called them “beans with legs,” also an accurate description.

You can imagine the frenzy that followed.

“This is the most exciting day of my life!” Eli exclaimed.

“The most exciting day of your life will be when you actually have your own kids,” Jacob replied. “But for now..yeah.”

They both delight in saying, “We’re grandparents now.”

When we returned from Sunday School, there seemed to be at least two more of them. There are now six to eight. It’s really hard to count because though they have doubled in size and lightened in color to a healthy pink, they are still tiny and always clumped up together in a big ball.

It has been truly fascinating to watch, for all of us. The other night after the kids were asleep Becky and I sat in front of the cae watching them for almost half an hour while we talked and caught up with each other.

Many people wanred us that gerbils often eat their offspring, but so far I have to say that Bob has been a great mother. Her behavior is totally different than it was before. She is constantly grooming them, feeding them, fixing up the cage. The guy at the pet store told us she would like extra bedding and any and all paper products. So we keep adding stuff. She takes any paper and ches it up into tiny pieces. She has made a high, conical nest, with the babies inside. Sometimes she gets on top to nurse and covers herself up. Clearly, the goal is hiding and protecting the little things. Imagine how low on the food chain an adult gerbil then think about these babies. A big spider could eat them!

Hopefully they will all survive. A few are starting to grow fur and turn dark. The loons at gerbil.org say we can start carefully picking them up any day now. In another month we can give them away and we need to do it before one of the sons does the nasty with his mom. They repoduce incredibly quickly. I’ve been told that two gerbils could, in ideal conditions, produce 250,000 in a year and that they go into heat the moment after they give birth.

Crazy. In the meantime, while I sit here typing and wtacing college basketball, the little things are chirping like baby birds.