Another Slam Old School classic I’m thrilled to see rise from the vaults: a tribute to John Stockton when he had his number retired. I love reading these pieces and recalling the process of reporting and writing them. This one was especially fun for me, because I scooted out to Utah two days early and skied solo at Alta just after the slopes had opened in November and stayed very cheaply at a virtually abandoned Rustler Lodge. then I drove back down to Salt Lake and had a great, great 24 hours of hoops reporting.

Stockton played every game in 17 of his 19 seasons—an NBA record—while averaging 10.5 assists per, including the two best single-season averages in NBA history: 14.5 apg in ’89-90, and 14.2 in ’90-91. He had 34 games of 20 assists or more, and set another record by leading the League in dimes for nine straight seasons (’87-88 through ’95-96). It’s hard to imagine any of these records falling, and it’s equally hard to imagine even one person predicting any of this when the Jazz picked Stockton 16th in the ’84 Draft, not long after fellow Springfield-bound greats Hakeem Olajuwon, Michael Jordan and Charles Barkley.

and here’s my favorite piece of writing in the story:

When people talk about Stockton, you often hear words like “steady,” “reliable” and “not flashy.” All that could add up to “boring,” but nothing could be further from the truth. Watching him, you saw passion, creativity and determination. You also saw a gifted athlete, which tends to be overlooked as people focus on things like heart, smarts and guts. 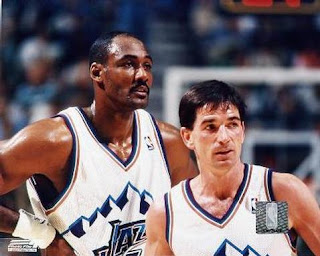 Another good review in — Booklist. Just some great photos
Scroll to top