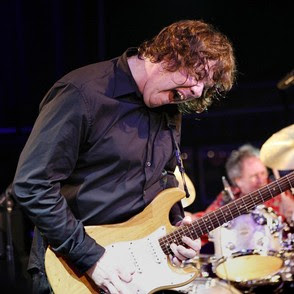 I was shocked to hear about guitarist Gary Moore’s death at age 59. The news prompted me to pull this 2004 Guitar World interview out of my archgives. I interviewed Gary several times. He was a UK and Euro legend who rarely made it to the US. I saw one of his few American solo shows, at the Beacon Theatre when he was promoting his second blues album. The great Albert Collins opened.

Gary was a kind and easy interview, the kind of guitar guy whom I could have easily spent hours just shooting it with.

Gary Moore’s embracing of his musical roots on 1990’s Still Got The Blues was downright revelatory. The Irish axe slinger  traversed the worlds of hard rock and fusion for two decades, establishing himself as one the instrument’s most accomplished and expressive players without ever quite finding his musical home. His niche turned out to be waiting for him back in the music of his youth.