I was listening to the Spurs/Griz Game on Satellite radio in my car the other day. It was the Spurs home broadcast and I was struck by how insightful and honest an analyst Sean Elliott was. That made me think back to this interview I did with him several years ago, conducted from china, as he was in a car on the way to the team plane. He was smart and insightful and I somehow ended up talking quite a bit about coaching. Maybe because he was being unusually honest about player/coach dynamics and relationships… And I mean unusual not in terms of him, but in terms of athletes in general.

I was very pleased to see this interview was one of the Old School classics reposted on Slam Online. So now, in honor of the Spurs’ impending NBA Playoffs implosion at the hands of the feisty Memphis Grizzlies, I present to you…. 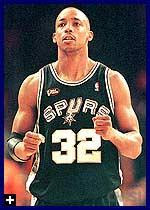 Sean Elliott made history. Come read about it.

Sean Elliott means a lot of things to a lot of different people. To Alonzo Mourning, a man who suffered from a similar kidney ailment, Elliot served as an inspiration, providing hope of return where none existed before. To the Portland Trail Blazers, victims of his “Memorial Day Miracle,” Sean was a ball player, and a clutch one at that. To fans of the Spurs, Elliot was the starting small forward on a championship team. Now retired and working in the broadcast booth, Sean is the voice of the Spurs, and still stands as a testament to modern medicine and resiliency. He is still a miracle at work.—Tzvi Twersky

Sean Elliott will always be remembered as the first professional athlete to return to action following an organ transplant. On the one hand, that’s how it should be; few of us will ever comprehend the effort it took to return to the Spurs in 2000, less than a year after his older brother Noel donated a kidney that saved Elliott’s life. On the other hand, it overshadows the fact that, for more than a decade, Elliott was a very good NBA player. The starting small forward for the Spurs’ 1999 championship team, he averaged 14.2 ppg, 4.3 rpg and 2.6 apg in 12 seasons, 11 of them spent in San Antonio.

“Sean was a handful for anyone to guard,” recalls Kenny Smith. “A 6-8 guy who could put the ball on the floor, shoot, drive, pass. He could do it all.”

Click over to Slam Online to read the whole interview.