—This post is adapted from Chapter 8 of Big In China: My Unlikely Adventures Raising A Family, Playing The Blues and Becoming A Star in China (Harper). Click here to buy. Copyright 2011 by Alan Paul.

There are countless motivations for traveling, but most people abandon “throwing yourself into the deep end to see if you can swim” after they have kids. It just feels too risky to set off on aimless wanderings into parts unknown with children in tow.

Yet kids too can tap into something deep within themselves when forced to stretch beyond their comfort zones, which we began realizing as soon as we took our first trip into China’s vast, beautiful and underdeveloped interior. These journeys were far more adventurous than anything we would have attempted at home.

China has three week-long holidays when virtually the entire country shuts down. These breaks are prime times to go exploring, but because 1.3 billion other people have the same idea, many expats prefer to stay put or leave the country, lighting out for Thailand, Malaysia, or other Asian ports of call. We generally ignored this line of thinking.

When the May holiday rolled around, we wanted a China adventure, one far enough off the beaten path to avoid huge crowds. On a WSJ colleague’s recommendation, we chose the south­central province of Guizhou, a remote, river­filled place dotted with ethnic minority villages set on high mountains
.

It was not an obvious destination. As China’s poorest province, with a per capita income of $614, Guizhou lacked amenities a vacationing family might seek. The expat­-oriented travel agent first tried to correct me, then laughed out loud when I insisted on buying air tickets to the capital of Guiyang.

We spent one night there, having our first taste of local food, which was different from any other Chinese cuisine I had tasted, its extreme spiciness balanced by sour, pickled vegetables, cilantro, and other fresh herbs. We became regulars at several Beijing Guizhou restaurants for the rest of our stay in China.

“We say, if it doesn’t have chilies, it’s not food,” said our guide Huang Duan (“Call me Howard”). As a lifelong hot food devotee, I felt like I had found my tribe, but in most respects, it felt as if we were at the end of the world.

A growing pack of curious onlookers followed us from our hotel to the restaurant in Guiyang, and the entire waitstaff crowded around two­-and­-a-­half-­year-­old Anna, wanting to hold her, kiss her, and pose for pictures with her. This ritual would be repeated over and over during our visit; Gandalf the White wizard could not have received more amazed stares had he appeared on the streets of Guizhou.

“Many of these people have never seen anyone who looks like Anna, except in pictures,” Huang Duan explained. “They think she looks like an angel.” 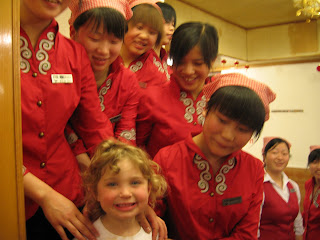 The next day we drove three hours to the mountain outpost of Kaili, a much smaller, poorer, and dirtier city, which is the capital of the “Miao and Dong (minority groups) Autonomous Prefecture.”
We bumped over rutted roads in this rough coal-­mining region, taking in scenes of slag and ash heaps and bustling mines. I wondered what we had gotten ourselves into, but then we drove through deep green mountains, with even the steep­est slopes covered in terraced rice paddies. Men plowed the muddy fields behind water buffalo. Women chopped tall grass with hand-held scythes, loading it into large wire baskets bal­anced on either end of a long wooden pole carried across their shoulders.

It was fascinating and beautiful, but as the day wore on, the kids wilted in the rising heat as we bounced from one village to another. By the time we climbed into the van for the bumpy, sweaty ride back from a ramshackle village where we bought batik purses and jackets, we were worn out, the kids were rest­less, and I wondered if we could keep up this pace for three more days. Chinese tour guides seemed to think that they were not doing their job if they did not rush you to as many places as possible each day. We were passing through remarkable countryside, but not really stopping to explore it, sticking instead to a steady litany of villages, which were fascinating but beginning to run together, especially for the kids.

Our anxiety deepened during dinner at a stuffy, un­air-conditioned restaurant. Huang Duan ordered our food, then ran out to get us cold beer and soda when the waitress said they did not have any. As Becky and I pulled delicious, slow-­cooked ribs out of a bamboo steamer filled with moist, flavorful rice, eight-year-old Jacob let out a yelp. “I hate this food!” he screamed.

Eli, 5, flopped onto the old linoleum floor, where Anna joined him, much to the horror of the young waitress hovering by the door to our private room holding a pot of tea. Our children were falling apart, and it was clear that we couldn’t maintain this pace for three more days.

The next morning, the kids ate the Trix cereal we traveled with while Rebecca and I conferred with Huang Duan over a breakfast of dumplings and spicy noodles. We told him to slash a third of each day’s activities and allow time for the kids to ramble through some of the beautiful fields we were zipping by. We were forcing flexibility on our children, but had to be a bit realistic.

We visited a large Miao village, where we joined Chinese tourists watching a traditional flute and dance show, the women clad in colorful hand-­embroidered dresses. As usual, Anna’s appearance drew as much attention as the little girls clad in traditional silver hats and necklaces. We bought the kids wooden swords that would get a workout over the next few days. Later we drove farther into the boonies and were the lone visitors in a remote Miao outpost.

Packs of beautiful, dirty­-faced kids followed us everywhere so I started filling my pockets with lollipops and gum at tiny village shops. Jacob and Eli loved handing out the sweets. One five­-year-­old boy appeared with a four-­inch bug on a string leash. Our kids thought that this mantis-­like creature was the coolest pet they had ever seen. 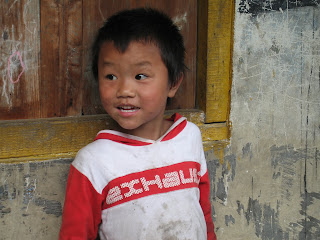 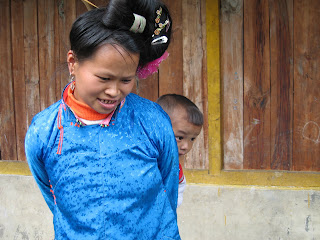 The next day we told our guide to drop us off so we could hike across rice paddies and through two villages, which were off the tourist path. I stopped at a counter to buy water and cookies for the kids. A group of village women, clad in tra­ditional blue smocks and white head coverings, were eating lunch in a back room. One called out, “Chi fan!” “Chi fan!” (Eat, eat!), and waved me in. When I entered, she handed me a bowl of congee (rice porridge) and gently pushed me onto a small wooden stool. The congee tasted like glue. Looking at a sea of smiling, expectant faces, I smiled and said, “Hao chi!” (Tastes good!). 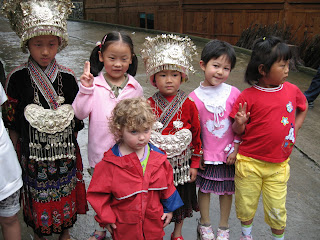 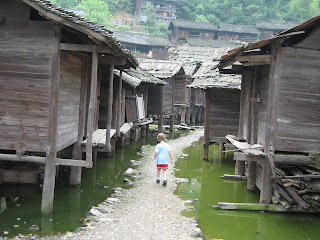 They pulled up another chair and handed Rebecca a bowl. Soon bowls of cooked food came our way, including some spicy mystery meat, which lent the congee a strong, vibrant taste. The kids watched the whole scene with amused smiles, while eating their “Ocop” — faux Oreos. We now considered packaged cookies, reliably available anywhere, another essential food group.

We lunched at a local barbecue joint hard by the banks of the churning Bala River underneath cloud-­shrouded, deep green peaks. Our guide did not want to take us there and remained uneasy when we insisted. Becky and I laughed about how uptight he was, but the source of his discomfort soon became clear: even by rural China standards, the sanitary conditions were spotty.

As we tentatively walked around the outdoor dining area waiting for our food, our kids started playing with a gaggle of children. Their playmates were fellow diners as well as Miaos from a neighboring village, including one boy zipping around on a homemade scooter – two planks of wood with rickety wheels attached. He gave each of our kids a turn. Throughout this trip Jacob and Eli made friends with these fun-loving Chinese boys, getting into hardcore games of tag, karate and Gameboy-playing. There are an awful lot of wild boys in the world, and it became obvious that they can spot one another and connect without saying a word.

Anna picked up a small fish a villager had caught and swung it around by its tail, much to the delight of the other guests eating nearby, all of them tourists from eight hours away. They handed us little cups of beer and insisted we sample their fresh­ grilled meat and fish.

Jacob, a veritable vegetarian, was so hungry and having so much fun with his new friends that he tried marinated, grilled beef. He tentatively stuck a corner in his mouth and nibbled, as Becky and I watched intently while pretending to have no interest.

He gobbled down the piece and asked for another. He ate a whole order and has been a steak-­loving carnivore ever since.

We all grilled and ate together, then the men sat in the gazebo drinking beer while the women walked down to the riverbank and oversaw the children. Becky would normally have given me a hard time about this unfair division of labor, but we were both too enchanted to want to change a thing. The kids scampered around, catching crabs, throwing rocks into the raging brown river, and playing tag.

Huang Duan, finally realizing we were happy and that he wasn’t doing a bad job, joined us, eating, drinking, and serving as our translator. We lingered for hours, as I downed one tiny plastic cup of lukewarm beer after another after endless toasts of “gan-bei” (bottoms up).

As we started to say our goodbyes, four of the older village girls, all about 12 years old, swept in to take our bottles. They carefully poured the remnants of each into a two-liter soda bottle, no doubt for their parents’ enjoyment, and gathered up the empties, which each had a deposit worth about a dime.

We finally began slowly walking through the light mud back to our van. “Thank you, Dad,” Jacob said, giving me a big hug. “This was the best lunch ever.”
—This story is adapted from Big In China: My Unlikely Adventures Raising A Family, Playing The Blues and Becoming A Star in China (Harper Collins). Available in all formats at all retailers. Copyright 2011 by Alan Paul.

I wish I had taken some better video… these were all done with my little pocket Canon Powershot and I didn’t really know how to edit or clean up video at that point, either.

In case anyone doubts the level of interest in Anna. This is from the restaurant, as described in this excerpt:

Next two are Miao folk dancers from one of the villages we visited: