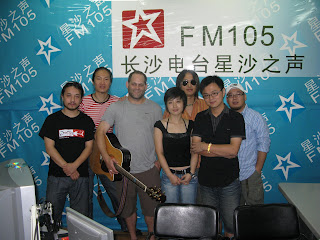 “What a romp. After writing about music for years, Alan Paul walked the walk, preaching the blues in China. Anyone who doubts that music is bigger than words needs to read this great tale.”

—This post is adapted from Chapter 8 of Big In China: My Unlikely Adventures Raising A Family, Playing The Blues and Becoming A Star in China (Harper). Click here to buy. Copyright 2011 by Alan Paul

The following excerpt, from Chapter 30, Bittersweet Surrender, captures Woodie Alan when we were riding a crest and performing the first of three gigs at Changsha, Hunan’s Coco Clubs.
Our first gig was at Coco’s “private club for successful people,” a members-only establishment that looked like the bastard child of a Seventies fondue restaurant and a high-end brothel, with burnished wood and red banquettes everywhere. It also featured an impressively stocked cigar humidor and an extensive private bottle collection where members kept their own wine, cognac and scotch.
The packed crowd cheered loudly before and after every song, a remarkably enthusiastic reception for American roots music in Chairman Mao’s home province. Though it was a Wednesday night, people were partying hard.
When we kicked into our next-to-last song, “Hey Hey Guniang,” the hard-charging Chinese jump blues sung by Zhang Yong, three beefy tough guys and their beautiful molls started dancing right in front of the stage. I had noted them all night as they alternated between drinking cognac in their banquette booth and leaping up to cheer. One of the men stumbled towards me, with something in his hand. I couldn’t make out what it was until he stuck a giant Cuban cigar in my mouth and raised his lighter with an unsteady hand.
I continued to pound away on my guitar, the giant stogie protruding out of my crooked grin. My hand was aching and bleeding under the bandages from a cut I received from a broken beer bottle in Xiamen, but I didn’t even notice. As we segued into the American jump blues “Kansas City,” I held the cigar in my left hand and spread my arms wide as I belted out, “I’m going to Kansas City, Kansas City here I come.” Watching all these Chinese people grow almost delirious, dancing with abandon, I growled out the lyrics: “They got some crazy little women there and I’m gonna get me one.”
When we ended the night with “Soulshine,” the crowd clapped along, swaying to the music and waving lighters in the air. I thought of Warren Haynes, the Allman Brothers Band guitarist who wrote the song, and remembered all the time I had spent listening to his music, watching him play and interviewing him on his tour bus and in his New York apartment. I imagined how happy he would be to have his music spread so far from home and for the first time I understood the ecstasy of the evangelist. I felt like a preacher spreading the gospel into the farthest reaches of China. 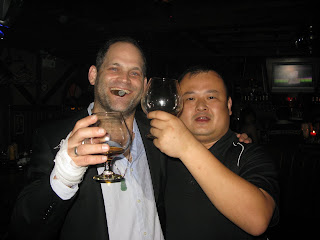 My patron - the guy who provided the cigar and cognac

When we finished playing, the tough who had given me the cigar pulled me down into his banquette and poured me a glass of Courvoisier. He and his buddies patted me on the back, as two long-legged beauties slid in on either side of me. When one of the thick-necked men raised his snifter in salute, I realized that the girls were just like the cigar and the cognac to them— rewards offered for a job well done.

Before I could sneak away, I felt a hand on each of my thighs. One of the women pulled me close and whispered into my ear, in slurred, drunken English.
“What is the name of your bass player?”
“Zhang Yong.”
“If you bring me to Zhang Yong, you can touch me anywhere.”
She squeezed my thigh hard. Then the other one pulled me to her and put her lips inside my ear. “Don’t bring her to your bass player.” She was equally drunk. “Bring me.”
The first one yanked me back. “Touch me anywhere!”
I laughed at the fact that the first time I had groupies they were just trying to get to Zhang Yong, but I wasn’t surprised. The quiet, self-possessed bassist had several beautiful girlfriends in Beijing, sometimes showing up at an afternoon gig with one and an evening performance with another. When I asked him once, in Chinese, how many girlfriends he had, he laughed and responded, in English, “Many, many girlfriends.”
I just wanted to get away from both of these women. The path of least resistance was to lead the more persistent one to Zhang Yong, who could certainly handle her easier than I could. “Just come with me,” I said
She slid out of the booth and rose onto unsteady feet. When I got up she put her arm around my waist and leaned into my side. We walked into the back room where the band was sitting at a discrete corner table. Surprise washed over everyone’s faces at the sight of this beautiful Chinese woman draped over me. “Don’t worry,” I said in Chinese. “She wants Zhang Yong.”
He got up and laughed when I told him to be careful. They walked off together and five minutes later he returned alone and said that he had walked outside and put her in a cab.
Drummer Lu Wei was on fire throughout our three days performing in his home province of Hunan:

The Allman Brothers turn 50! The story of their formation
0 replies