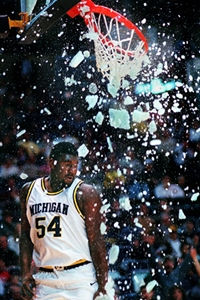 This is just very very sad. Tractor was starring for U-M when I was living in Ann Arbor in 96-98. I saw him play a lot and did a piece in Slam – one of the first things I wrote for the magazine.  He made tremendous strides during his career there, and started passing out of the box his final year; he had sort of been a blackhole before then.  When he lost a bunch of weight prior to the draft, I took him seriously and, combined with the improvement I had seen, thought he was going to thrive in the NBA, despite the fact that he was simultaneously too small (6-8) and too big (300 pounds or so) at once.  I remember laughing at the Mavs when they traded his draft rights for Dirk Nowitzki, some German teen I had never heard of. Oops.

Tractor’s legacy at Michigan is cloudy. He was part of a team that let everyone down in a million ways, and he was one of four players, along with Louis Bullock., Chris Webber and Maurice Taylor who seem to have taken money fro Ed Martin. I saw all of them, including Martin, at St. Cecilia’s in Detroit when I spent time there writing a story for Slam – one of my favorite things I’ve ever done, by the way.

Aside from the money, the team was a really a letdown on the court. They never achieved what seemed possible and we’ll never know why.

But Tractor was a garrulous, friendly guy and a cool presence – and what a perfect nickname, to tie this in with the previous post.  During the weeks before the 98 Draft, he was working out for teams and Becky and I were in the old Detroit airport flying back to New York. At the last minute, they announced a flight cancellation and a gate change for us and we knew that it was a blood-in-the-water, first-come, first-served situation. So I took off running. I turned the corner into the  right corridor at full sprint, Becky trailing me, pushing infant Jacob in a stroller. I was flying, with  bags flapping behind me, when I almost ran smack into Tractor. He had lost a ton of weight but was still massive, like a brick wall. I stopped, said hi, reintroduced myself, shook hands and said, “I gotta go.”

He laughed.  As I ran away, I looked over my shoulder and said, “Tractor, you look great! Keep working hard.”

And he smiled this huge smile and said, “Thanks, man. I will.”

Soon after, I was at Toys R Us and saw a U-M Tractor bobblehead, which I bought and placed on Jacob’s dresser, next to Josh Gibson. Both are still there 13 years later.