What the heck is going on here on the East Coast?

The latest insanity is the killing of the long-rumored giant rat in a NYC housing project. My neighbor had an exterminator over because he said he saw a rat “and it was way bigger than any rat I’ve ever seen.” I sure hope it wasn’t 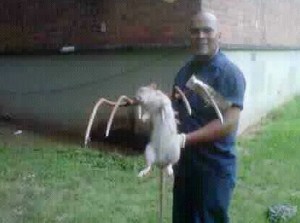 From the NY Daily News

this big. When people say that cats are scared of these rats it sounds like hyperbole – until you see the picture. See for yourself.

Apparently, these things were imported from West Africa as pets until being banned in 2003.